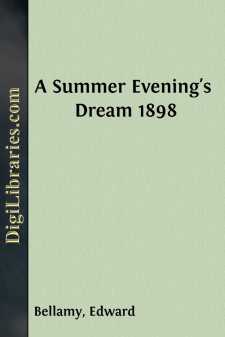 It is a village street, with great elms on either side, while along the middle stands another row set in a narrow strip of grassy common, so that the street and roadway are in reality double. The dwellings on either side are not only widely parted by the broad street, but are still further isolated, each in its large garden of ancient fruit trees. It is four o'clock of a sunny August afternoon, and a quiet, Sabbath-like but for its lazy voluptuousness, broods over the scene. No carriage, or even pedestrian, has passed for an hour. The occasional voices of children at play in some garden, the latching of a gate far down the street, the dying fall of a drowsy chanticleer, are but the punctuation of the poem of summer silence that has been flowing on all the afternoon. Upon the tree-tops the sun blazes brightly, and between their stems are glimpses of outlying meadows, which simmer in the heat as if about to come to a boil. But the shadowed street offers a cool and refreshing vista to the eye, and a veritable valley of refuge to the parched and dusty traveler along the highway.

On the broad piazza of one of the quaint old-fashioned houses, behind a needless screen of climbing woodbine, two girls are whiling away the afternoon. One of them is lounging in a lassy rocking-chair, while the other sits more primly and is industriously sewing.

"I suppose you 'll be glad enough to see George when he comes to-night to take you back to the city? I'm afraid you find it pretty dull here," said the latter, with an intonation of uneasy responsibility sufficiently attesting that the brilliant-looking girl opposite was a guest.

That young lady, when addressed, was indulging in a luxurious country yawn, an operation by no means to be hurried, but to be fully and lazily enjoyed in all its several and long-drawn stages, and as thus practiced a wonderfully calming and soporific relaxation wholly unknown to the fretted denizens of cities, whose yawn is one of irritation and not of rest. "I do so enjoy your Plainfield yawns, Lucy," she said when she had quite finished. "Were you saying that it was a little dull? Well, perhaps it is, but then the trees and things seem to be' enjoying themselves so hugely that it would be selfish to make a fuss, even if it is n't exactly my kind of fun."

"Your kind of fun is due by the six-o'clock stage, I believe."

The other laughed and said, "I wish you would n't make another allusion to George. I think of him so much that I 'm ashamed, as it is. I 'm sure this is a very aggravating place for an engaged girl to be at. One gets so dreadfully sentimental with nothing to take up the mind, especially with such monstrous moons as you have. I got fairly frightened of the one last night. It drew me out through my eyes like a big plaster."

"I don't care; it did. That was just the feeling."

There was no hurry about talking, for the rich, mellow summer silence had a body to it that prevented pauses from seeming empty, and it might have been half an hour afterward that Mabel suddenly leaned forward, putting her face close to the vine-trellis, and cried in a low voice, "Who's that? Po tell me! They're the very first persons who have gone by this afternoon, I do believe."

A pretty phaeton was slowly passing, containing an elderly gentleman and lady.

"Oh, that is only Lawyer Morgan and old Miss Rood," replied Lucy, just glancing up, and then down again. "They go out driving once a week regularly, and always at about this time in the afternoon."

"They look like afternoon sort of people," said Mabel. "But why does n't Lawyer Morgan take out his wife?"

"He has n't got any. Miss Rood comes nearest to that. Oh, no, you needn't open your eyes; there's not a properer old maid in town, or old bachelor either, for that matter."

"How long has this Platonic romance been going on, pray?"

"Oh, ever since they were young,—forty years, perhaps. I only know by tradition, you see. It began ages before my day. They say she was very pretty once. Old Aunty Perkins remembers that she was quite the belle of the village as a girl....