A Study of Shakespeare 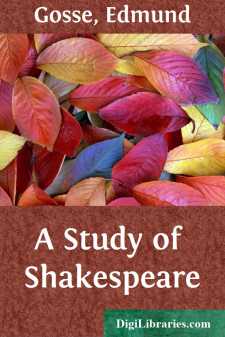 The greatest poet of our age has drawn a parallel of elaborate eloquence between Shakespeare and the sea; and the likeness holds good in many points of less significance than those which have been set down by the master-hand.  For two hundred years at least have students of every kind put forth in every sort of boat on a longer or a shorter voyage of research across the waters of that unsounded sea.  From the paltriest fishing-craft to such majestic galleys as were steered by Coleridge and by Goethe, each division of the fleet has done or has essayed its turn of work; some busied in dredging alongshore, some taking surveys of this or that gulf or headland, some putting forth through shine and shadow into the darkness of the great deep.  Nor does it seem as if there would sooner be an end to men’s labour on this than on the other sea.  But here a difference is perceptible.  The material ocean has been so far mastered by the wisdom and the heroism of man that we may look for a time to come when the mystery shall be manifest of its furthest north and south, and men resolve the secret of the uttermost parts of the sea: the poles also may find their Columbus.  But the limits of that other ocean, the laws of its tides, the motive of its forces, the mystery of its unity and the secret of its change, no seafarer of us all may ever think thoroughly to know.  No wind-gauge will help us to the science of its storms, no lead-line sound for us the depth of its divine and terrible serenity.

As, however, each generation for some two centuries now or more has witnessed fresh attempts at pilotage and fresh expeditions of discovery undertaken in the seas of Shakespeare, it may be well to study a little the laws of navigation in such waters as these, and look well to compass and rudder before we accept the guidance of a strange helmsman or make proffer for trial of our own.  There are shoals and quicksands on which many a seafarer has run his craft aground in time past, and others of more special peril to adventurers of the present day.  The chances of shipwreck vary in a certain degree with each new change of vessel and each fresh muster of hands.  At one time a main rock of offence on which the stoutest ships of discovery were wont to split was the narrow and slippery reef of verbal emendation; and upon this our native pilots were too many of them prone to steer.  Others fell becalmed offshore in a German fog of philosophic theories, and would not be persuaded that the house of words they had built in honour of Shakespeare was “dark as hell,” seeing “it had bay-windows transparent as barricadoes, and the clear-stories towards the south-north were as lustrous as ebony.”  These are not the most besetting dangers of more modern steersmen: what we have to guard against now is neither a repetition of the pedantries of Steevens nor a recrudescence of the moralities of Ulrici.  Fresh follies spring up in new paths of criticism, and fresh labourers in a fruitless field are at hand to gather them and to garner.  A discovery of some importance has recently been proclaimed as with blare of vociferous trumpets and flutter of triumphal flags; no less a discovery than this—that a singer must be tested by his song.  Well, it is something that criticism should at length be awake to that wholly indisputable fact; that learned and laborious men who can hear only with their fingers should open their eyes to admit such a novelty, their minds to accept such a paradox, as that a painter should be studied in his pictures and a poet in his verse.  To the common herd of students and lovers of either art this may perhaps appear no great discovery; but that it should at length have dawned even upon the race of commentators is a sign which in itself might be taken as a presage of new light to come in an epoch of miracle yet to be.  Unhappily it is as yet but a partial revelation that has been vouchsafed to them.  To the recognition of the apocalyptic fact that a workman can only be known by his work, and that without examination of his method and material that work can hardly be studied to much purpose, they have yet to add the knowledge of a further truth no less recondite and abstruse than this; that as the technical work of a painter appeals to the eye, so the technical work of a poet appeals to the ear.  It follows that men who have none are as likely to arrive at any profitable end by the application of metrical tests to the work of Shakespeare as a blind man by the application of his theory of colours to the work of Titian....