A String of Amber Beads 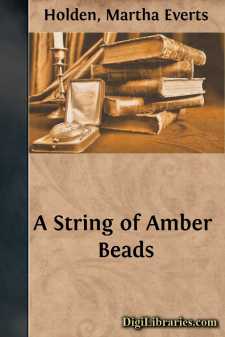 "I didn't think!" A woman flings the whiteness of her reputation in the dust, and, waking to the realization of her loss when the cruel glare of the world's disapproval reveals it, she seeks to plead her thoughtlessness as an entreaty of the world's pardon. But the flint-hearted world is slow to grant it, if she be a woman. "You have thrown your rose in the dust, go live there with it," the world cries, and there is no appeal, although the dust become the grave of all that is bright and lovely and sweet in a thoughtless woman's really innocent life. A young girl flirts with a stranger on the street. The result is something disagreeable, and straight-way comes the excuse: "Why, I didn't think! I meant no harm; I just wanted to have a little fun." Now, look me straight in the eye, young gossamer-head, while I tell you what I know. The girl who will flirt with strange men in public places, however harmless and innocent it may appear, places herself in that man's estimation upon a level with the most abandoned of her sex and courts the same regard. Strong language, perhaps you think, but I tell you it is gospel truth, and I feel like going into orders and preaching from a pulpit whenever I see a thoughtless, gay and giddy girl tiptoeing her way upon the road that leads direct to destruction. The boat that dances like a feather on the current a mile above Niagara's plunge is just as much lost as when it enters the swirling, swinging wrath of waters, unless some strong hand head it up stream and out of danger. A flirtation to-day is a ripple merely, but to-morrow it will be a breaker, and then a whirlpool, and after that comes hopeless loss of character. Girls, I have seen you gather up your roses from their vases at night and fold them away in damp paper to protect their loveliness for another day. I have seen you pluck the jewels like sun sparkles from your fingers and your ears, and lay them in velvet caskets which you locked with a silver key for safe beeping. You do all this for flowers which a thousand suns shall duplicate in beauty, and for jewels for which a handful of dollars can reimburse your loss; but you are infinitely careless with the delicate rose of maidenliness, which, once faded, no summer shining can ever woo back to freshness, and with the unsullied jewel of personal reputation which all the wealth of kings can never buy back again, once lost. See to it that you preserve that modesty and womanliness without which the prettiest girl in the world is no better than a bit of scentless lawn in a milliner's window, as compared to the white rose in the garden, around which the honey bees gather. See to it that you lock up the unsullied splendor of the jewel of your reputation as carefully as you do your diamonds, and carry the key within your heart of hearts.

I received a letter the other day in which the writer said: "Amber, I want to come to the city and earn my living. What chance have I?" And I felt like posting back an immediate answer and saying: "Stay where you are." I didn't do it, though, for I knew it would be useless....