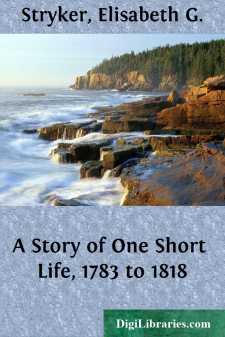 Our country is quietly enjoying the benefits of a great activity. Foreign Missions are still feeling a noble impulse, and the origin of this force was, under God, in the heart and brain of Samuel J. Mills.

It is a name known to us, but a history almost forgotten. Only upon the shelves of some antiquarian, or in the undisturbed library of some old homestead can a volume be found bearing the title "Mills' Memoirs." Take it down, blow the dust from the leaves yellow with sixty-seven years, and you will find the narrative related in the stately, old-time style, and somewhat laudatory and expansive.

He had no son, as Adoniram Judson had, gladly to record the details of his busy life. The writer was Dr. Gardiner Spring, who laments having failed in the attempt to obtain what appeared to him to be important information. We are thankful to him for gathering even these rare fragments.

From a sketch of Salmon Giddings, the Damon Memorial, a letter from a relative of Mills, and the life of Henry Obookiah have come a few incidents and facts, but mainly in the record of Dr. Spring have we found our Story of One Short Life. Such hid treasure should find the light, even though quarried by unskillful hands.

Biographies are apt to seem discouraging, in the beginning; the attention being riveted upon the supposed hero, meets with a shock in finding it has been following the history of his great-grandfather. The scattered energies are then directed upon the grandfather, only to meet with a second delay. Again recovering, and following the father's fortunes, the son, the subject of the work, is at last introduced.

The great-grandfather of our hero must be brought in just long enough to answer one question. He was once asked, "How did you educate four sons at Yale College, and give each a profession?" His reply was, "Almighty God did it, with the help of my wife." The grandfather (of our hero) was drowned while some of his children were still young. His widow, committing their babes to the God of the fatherless, especially offered for His service, a son named Samuel John. He became a minister, and for many years was settled in Torringford, Connecticut. He was eminent for his ability and character. Mrs. Stowe said of him—"He was one ingrain New Englander. Of all the marvels that astonished my childhood, there is none I remember to this day with so much interest as Father Mills." This was the name by which he was extensively known. His wife was a woman exemplary and devout.

Being assured that the three preceding generations were commandment-keeping, we shall see how the Lord showed mercy unto the fourth. Almighty God and a true mother secure for many a man's sons, not only education, but large efficiency and honor.

The seventh child, born April 21st, 1783, in this Torringford home, was a son, named after his father, Samuel John. The child grew to be a mighty instrument in God's hand, which He in His wisdom selected, knowing the fineness of the material with which he dealt....