A Son of the Hills 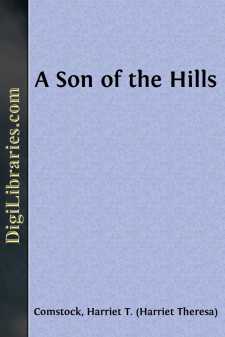 Lost Hollow lies close at the foot of the mountain which gives it its name. The height of neither is great, geographically considered; the peak is perhaps eighteen hundred feet above sea level: The Hollow, a thousand, and from that down to The Forge there is a gradual descent by several trails and one road, a very deplorable one, known as The Appointed Way, but abbreviated into—The Way.

There are a few wretched cabins in Lost Hollow, detached and dreary; between The Hollow and The Forge are some farms showing more or less cultivation, and there is the Walden Place, known before the war—they still speak of that event among the southern hills as if Sheridan had ridden through in the morning and might be expected back at night—as the Great House.

Among the crevasses of the mountains there are Blind Tigers, or Speak Easies—as the stills are called—and, although there is little trading done with the whiskey outside the country side, there is much mischief achieved among the natives who have no pleasure of relaxation except such as is evolved from the delirium brought about by intoxication.

The time of this story is not to-day nor is it very many yesterdays ago; it was just before young Sandy Morley had his final "call" and obeyed it; just after the Cup-of-Cold-Water Lady came to Trouble Neck—three miles from The Hollow—and while she was still distrusted and feared.

Away back in the days of the Revolution the people of the hills were of the best. All of them who could serve their country then, did it nobly and well. Some of them signed the Declaration of Independence and then returned to their homes with the dignity and courage of men in whose veins flowed aristocratic blood as well as that of adventurous freemen. There they waited for the recognition they expected and deserved. But the new-born republic was too busy and breathless to seek them out or pause to listen to their voices, which were softer, less insistent than others nearer by. In those far past times the Morleys and the Hertfords were equals and the Walden Place deserved its name of the Great House. The Appointed Way was the Big Road, and was kept in good order by well-fed and contented slaves who had not then dreamed of freedom.

The final acceptance of the hill people's fate came like a deadening shock to the men and women of the Lost Mountain district—they were forgotten in the new dispensation; in the readjustment they were overlooked! The Hertfords left the hills with uplifted and indignant heads—they had the courage of their convictions and meant to take what little was left to them and demand recognition elsewhere—they had always been rovers. Besides, just at that time Lansing Hertford and Sandford Morley, sworn friends and close comrades, had had that secret misunderstanding that was only whispered about then, and it made it easier for Hertford to turn his back upon his home lands and leave them to the gradual decay to which they were already doomed. The Waldens had retained enough of this world's goods to enable them to descend the social scale slower than their neighbours....