A Son of the City A Story of Boy Life 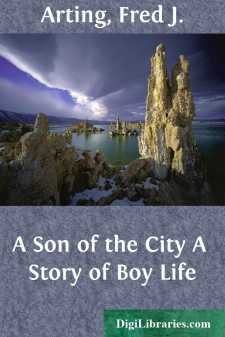 CHAPTER I IN WHICH OUR HERO GOES FISHING

Startled from a sound sleep, he fumbled blindly beneath the bed that he might throttle the insistent alarm clock before the clamor awakened the other members of the household. Then he lay back and listened breathlessly for parental voices of inquiry as to what he might be doing at the unearthly hour of half-past three on a late September morning.

Far down the railroad embankment which passed the rear of the house, an engine puffed lazily cityward with a load of empty freight cars. Over the elevated tracks a mile to the south, a train rumbled somnolently towards the park terminal, and under the eaves of the house, just above his room, two sparrows squabbled sleepily. Inside, the only audible sounds were the chirpings of a cricket somewhere down the hall, and the furious, muffled pounding of his own little heart.

He glanced from the window near the head of his bed. The air was oppressive with a strange, almost rural quietude. In the east, a faint streak of light brought the tree tops of the park into indistinct relief, and to the north a thin line of smoke floated apathetically from a hotel chimney to show that a light breeze from the west augured favorably for the morning's sport.

Stockings, knickerbockers, and blouse were drawn on with unwonted rapidity. His coat and necktie he left hanging over the back of the chair, disdained as unnecessary impediments on a fishing trip. Then with a final glance from the window at the fast-graying sky, he reached behind the bookcase for his carefully concealed pole and tackle, gathered his shoes in one hand, and tiptoed down the pitchy hall with the stealth of a cat.

Down the stairway he went, step at a time, scarcely daring to breathe as he shifted his weight again and again from one foot to the other. On the first landing, a board creaked with alarming distinctness. Came a maternal voice:

Her son hugged the stairway in a very agony of fear lest his carefully made plans had been spoiled. Why hadn't he walked along the end of the steps as bitter experience had taught? He knew that board was loose. Again the well-known tones:

"John, what are you doing?"

A subdued babel of conversation in the big south room followed, in which his father's deep bass took a prominent part.

"But you know I forbade fishing during school mornings. And he was looking at the DuPree's weather vane when he watered the lawn last night. Get up and see what he's doing."

John drew a sigh of relief as the deep voice sounded a sleepy protest. Minutes passed. His legs became cramped from inaction, yet he dared not stir. Were his parents asleep? Or was Mrs. Fletcher waiting merely until some tell-tale noise enabled her to order John senior forth on an expedition which would result in certain detection? If he had only avoided that misstep!

Then the kindly fast-mail thundered over the railroad tracks and enabled the seeker after forbidden pleasures to scurry to the first floor under cover of the disturbance.

In the hallway, the boy deposited his shoes and tackle very cautiously on the carpet, and tiptoed over to the unused grate. There he extracted from behind the gas log a package of sandwiches, surreptitiously assembled after supper the night before. Then with both hands grasping the doorknob firmly, he strained upwards, that weight be thrown off the squeaking hinges as much as possible, and swung the door back, inch by inch, until the opening permitted a successful exit.

The old cat bounded from her bed on the window ledge with a thud and mewed plaintively for admittance as he stood with one hand on the screen door, and fumbled in his pockets. Sinkers, spare hooks, a line with a nail at one end on which to string possible victims of his skill, "eats," his dollar watch that he might know when breakfast time came around—all present and accounted for.

The family pet protested volubly as he blocked her ingress with one foot and closed the door as slowly and noiselessly as it had swung open. A moment spent in lacing his shoes, a consoling pat for puss, and he was off on the dogtrot for Silvey's house, with tackle swinging easily to and fro in one hand and a noiseless whistle of exultation coming from half-parted lips which became more and more audible as his rapidly echoing footsteps increased the distance from home. For he had made good his escape, the strange fragrance of the cool, early air with its absence of city smoke went to his head like wine and set his pulses a-throb with a very joy of living, and five hours, three hundred glorious minutes, if the excursion were stretched a bit past breakfast time, of enchanting, tantalizing sport lay before him....