A Solemn Caution Against the Ten Horns of Calvinism 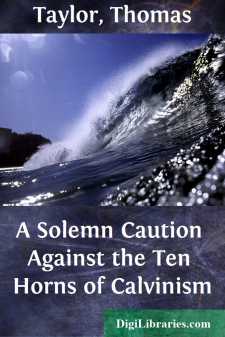 THE author of the following strictures hopes your candour will pardon his addressing you in this public manner. Who he is, or what he is, signifies very little; only he begs leave to intimate, that he hopes he is a follower of that Saviour who “gave himself a ransom for all.” He was convinced when young in years, in a great measure, by reading “Alleine’s Alarm;” and the Calvinists being the only professing people near him, he soon got acquainted with them, and was, for some time, in their connexion. Being young in years, experience, and knowledge, he saw with their eyes, and heard with their ears; yet not without many scruples concerning the truth of several of their tenets. Sometimes he proposed his doubts, yet seldom had much satisfaction; but rather was a little brow-beaten for being muddy-headed. He often paused, and pondered, and read, and rubbed his head, and wondered what he ailed. Cole on “God’s Sovereignty” was put into his hands to clear his dull head, and make him quite orthodox; but still he could not see how God could be just in condemning men for exactly doing what he had decreed them to do. After many conflicts, your little piece, entitled, “Predestination Calmly Considered” fell into his hands; he read it over with that attention which both the doctrine and performance deserve; and never had a doubt, from that day to this, that God is loving to every man. You will, dear sir, excuse the liberty which he has taken in recommending that little useful piece, as well as some others, which are published in your catalogue. But, perhaps, you will say, “Who hath required this performance at your hands? Are there not already better books written upon the subject than yours?” He answers, Yes; there are books much better written: They are really written too well for the generality of readers. He wanted to adapt something to the genius and pockets of the people. The generality of such as profess religion are poor, and have little time, little capacity, little money. If they read and understand this, perhaps they may be capable of relishing something better. However, the writer throws in his mite, and hopes it will be acceptable. In the meantime may you, who have much to cast into the divine treasury, go on and abound until you finish your course with joy. I am, Reverend Sir, your obedient and humble servant,

When the forerunner of our blessed Lord came preaching his dispensation among men, it is said, “the same came for a witness, to bear witness of the light, that all men through him might believe. He was not the light, but was sent to bear witness of the light. That was the true light which lighteth every man which cometh into the world.” It is farther added, “this is the condemnation, that light is come into the world, but men love darkness rather than light.”

One would think such express testimonies were sufficient to convince any man who attentively considers what is here spoken, and who spake these words, “that Christ tasted death for every man;” and that he “would have all men to be saved, and come to the knowledge of the truth.” Yet it is well known, men have found the art of torturing these and many other scriptures to death, so as to leave neither life nor meaning in them....