A Slave Girl's Story Being an Autobiography of Kate Drumgoold. 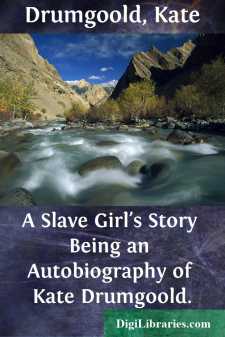 Once a slave girl, I have endeavored to fill the pages with some of the most interesting thoughts that my mind is so full of, and not with something that is dry.

This sketch is written for the good of those that have written and prayed that the slaves might be a freed people, and have schools and books and learn to read and write for themselves; and the Lord, in His love for us and to us as a race, has ever found favor in His sight, for when we were in the land of bondage He heard the prayers of the faithful ones, and came to deliver them out of the Land of Egypt.

For God loves those that are oppressed, and will save them when they cry unto him, and when they put their trust in Him.

Some of the dear ones have gone to the better land, but this is one of the answers to their prayers.

We, as the Negro Race, are a free people, and God be praised for it. We as the Negro Race, need to feel proud of the race, and I for one do with all my heart and soul and mind, knowing as I do, for I have labored for the good of the race, that their children might be the bright and shining lights. And we can see the progress that we are making in an educational way in a short time, and I think that we should feel very grateful to God and those who are trying to help us forward. God bless such with their health, and heart full of that same love, that this world can not give nor taketh away.

There are many doors that are shut to keep us back as a race, but some are opened to us, and God be praised for those that are opened to the race, and I hope that they will be true to their trust and be of the greatest help to those that have given them a chance.

I was born in Old Virginia, in or near the Valley, the other side of Petersburg, of slave parents, and I can just call to mind the time when the war began, for I was not troubled then about wars, as I was feeling as free as any one could feel, for I was sought by all of the rich whites of the neighborhood, as they all loved me, as noble whites will love a child, like I was in those days, and they would send for me if I should be at my play and have me to talk for them, and all of their friends learned to love me and send me presents, and I would stand and talk and preach for some time for them.

My dear mother was sold at the beginning of the war, from all of her little ones, after the death of the lady that she belonged to, and who was so kind to my dear mother and all of the rest of the negroes of the place; and she never liked the idea of holding us as slaves, and she always said that we were all that she had on the earth to love; and she did love me to the last.

The money that my mother was sold for was to keep the rich man from going to the field of battle, as he sent a poor white man in his stead, and should the war end in his favor, the poor white man should have given to him one negro, and that would fully pay for all of his service in the army. But my God moves in a way unknown to men, and they can never understand His ways, for He can plant His footsteps on the North, the South, the East, the West, and outride any man's ideas; and how wonderful are all of his ways. And if we, as a race, will only put our trust in Him, we shall gain the glorious victory, and be a people whose God is the God of all this broad earth, and may we humble ourselves before Him and call Him, Blessed.

I told you that my white mother did not like the idea of calling us her slaves, and she always prayed God that I should never know what slavery was, for she said I was never born to serve as did the slaves of some of the people that owned them.

And God, in His love for me and to me, never let me know of it, as did some of my own dear sisters, for some of them were hired out after the old home was broken up.

My mother was sold at Richmond, Virginia, and a gentleman bought her who lived in Georgia, and we did not know that she was sold until she was gone; and the saddest thought was to me to know which way she had gone, and I used to go outside and look up to see if there was anything that would direct me, and I saw a clear place in the sky, and it seemed to me the way she had gone, and I watched it three and a half years, not knowing what that meant, and it was there the whole time that mother was gone from her little ones....