A Sketch of the History of Oneonta 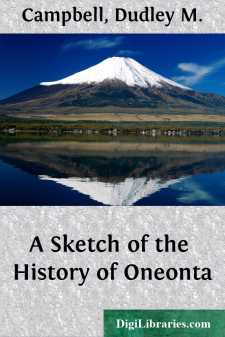 The territory comprised within the present boundaries of the town of Oneonta, previous to the war of the Revolution, was little known except as the scene of many a sanguinary conflict between different Indian tribes which contended with each other for its possession. The Delawares, whose home was on the river bearing their name, had been in peaceful possession of the upper Susquehanna valley from time immemorial; but long before the outbreak of hostilities between England and her trans-Atlantic colonies, the Tuscaroras, a warlike tribe from Virginia, wandered up the Susquehanna from Chesapeake Bay and laid claim to the upper portion of the valley as their hunting-grounds. From that time, with brief and uncertain intervals of peace, up to the close of the Revolutionary struggle, the war between the contending tribes was waged with relentless fury. Many a proud chief and valiant warrior fell beneath the tomahawk and became the victim of the merciless scalping-knife.

Eventually the strife between these aboriginal tribes terminated in favor of the invaders, or Tuscaroras, who thereupon allied themselves with the Six Nations occupying the more northern and western portions of the state. They formed small settlements, one within the present town of Oneonta, at the mouth of the Otego creek, and another at or near the mouth of the Charlotte. The former was on the farm now owned and occupied by Andrew Van Woert; the other on what is known as the Island on the farm of James W. Jenks. At both these places Indian utensils and implements of war have been found in large numbers; at both, Indian orchards of some extent were standing a few years ago.

These Indian settlements were destroyed by a detachment of American troops under Gen. Sullivan, who passed down the river from Cooperstown in the summer of 1779. Making a dam across the outlet of the lake, Sullivan succeeded in causing the water of the lake to rise considerably above the common level, when by removing the dam the stream was greatly swollen, and upon its current the colonial force, numbering about 1,000 men, was borne down the valley. It is related that the natives had become terrified at the sudden diminution of the water of the river and had fled in great haste from their homes, leaving the way unobstructed for the safe advance of the patriot force. Between the source of the stream and Unadilla, it is supposed that but few Indian orchards, cornfields or huts were left standing near the river. At the mouth of the Schenevus creek, a notable exception was made in favor of the Van Valkenburg family, residing then on the old Deitz farm across the river to the east of Colliersville, where now may be seen a number of ancient apple trees of Indian planting, still in a vigorous and fruitful condition. This Van Valkenburg family being half-breeds and friendly to the American cause, their property and possessions were not molested.

Sullivan's passage down the stream was effected by means of batteaux and strong rafts, and owing to the windings of the channel, and the necessary army luggage, his progress, notwithstanding the increased volume of water that bore his barks along, was somewhat slow....