by A. E. (Alfred Edward) Housman 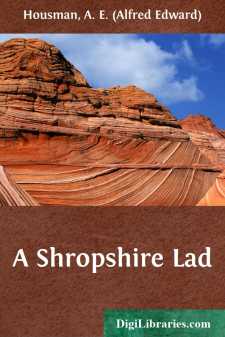 The method of the poems in A Shropshire Lad illustrates better than any theory how poetry may assume the attire of reality, and yet in speech of the simplest, become in spirit the sheer quality of loveliness. For, in these unobtrusive pages, there is nothing shunned which makes the spectacle of life parade its dark and painful, its ironic and cynical burdens, as well as those images with happy and exquisite aspects. With a broader and deeper background of experience and environment, which by some divine special privilege belongs to the poetic imagination, it is easier to set apart and contrast these opposing words and sympathies in a poet; but here we find them evoked in a restricted locale- an English county-where the rich, cool tranquil landscape gives a solid texture to the human show. What, I think, impresses one, thrills, like ecstatic, half-smothered strains of music, floating from unperceived instruments, in Mr. Housman's poems, is the encounter his spirit constantly endures with life. It is, this encounter, what you feel in the Greeks, and as in the Greeks, it is a spiritual waging of miraculous forces. There is, too, in Mr. Housman's poems, the singularly Grecian Quality of a clean and fragrant mental and emotional temper, vibrating equally whether the theme dealt with is ruin or defeat, or some great tragic crisis of spirit, or with moods and ardours of pure enjoyment and simplicities of feeling. Scarcely has any modern book of poems shown so sure a touch of genius in this respect: the magic, in a continuous glow saturating the substance of every picture and motive with its own peculiar essence.

What has been called the "cynical bitterness" of Mr. Housman's poems, is really nothing more than his ability to etch in sharp tones the actualities of experience. The poet himself is never cynical; his joyousness is all too apparent in the very manner and intensity of expression. The "lads" of Ludlow are so human to him, the hawthorn and broom on the Severn shores are so fragrant with associations, he cannot help but compose under a kind of imaginative wizardry of exultation, even when the immediate subject is grim or grotesque. In many of these brief, tense poems the reader confronts a mask, as it were, with appalling and distorted lineaments; but behind it the poet smiles, perhaps sardonically, but smiles nevertheless. In the real countenance there are no tears or grievances, but a quizzical, humorous expression which shows, when one has torn the subterfuge away, that here is a spirit whom life may menace with its contradictions and fatalities, but never dupe with its circumstance and mystery.

All this quite points to, and partly explains, the charm of the poems in A Shropshire Lad . The fastidious care with which each poem is built out of the simplest of technical elements, the precise tone and color of language employed to articulate impulse and mood, and the reproduction of objective substances for a clear visualization of character and scene, all tend by a sure and unfaltering composition, to present a lyric art unique in English poetry of the last twenty-five years....