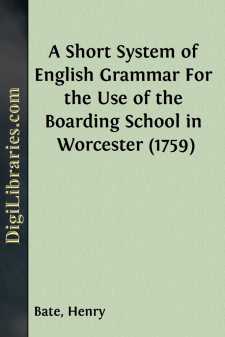 Usage and Custom are the Rules and Measures of every Language, and the Rules of Grammar have nothing more to do, than to teach it. The Grammar is to be fashioned from the particular Language, it treats of, and not the Language from the Grammar. For want of following this regular Plan, our Modern GRAMMARIANS have introduced the Grammar Rules of other Languages into their own; as if all Language was founded on Grammar, and the Rules in one Language would serve the same End and Purpose in another.

The Latin, for Instance, has only eight Parts of Speech, and the Writers of English Grammar have unthinkingly adopted the same Number; whereas with the Article, which the Latin has not, and which is of great Service in a Language, we have no less than nine. The Latin admits of Cases; but as different Cases, properly speaking, are nothing more than the different Inflections and Terminations of Nouns, English Nouns have no Cases. It is not agreeable to the Principles of Grammar to say that—of a Rose—is the Genitive Case of—Rose, or—to a Rose, the Dative; for of and to are no Part of the Word Rose, but only prefix Particles or Prepositions, which shew the different Relation of the Word Rose. So likewise when we say Alexander's Horse, the Word Alexander's is not the Genitive Case of Alexander; for strictly speaking the 's is no Part of the Word Alexander but the final Letter of the Pronoun Possessive his, and without the Apostrophe we shou'd read it thus; Alexander his Horse. If any of the Parts of Speech have Cases, the Pronouns have, and some of the Pronouns may perhaps have two; but for the Sake of making every Thing as easy as I can to the Learner, I have taken the Liberty of distinguishing such Pronouns into Prefix and Subsequent, and entirely laid aside Cases as useless and unnecessary. The Latin has Genders, the Adjective in that Language always varying to correspond with the Substantive; but ourAdjectives never vary, and therefore the Distinction of Genders has nothing to do with English Grammar, but is idle, trifling, impertinent.

Experience shews, that this Sort of pedantick Ignorance and Folly, has made that dark and obscure, which it was intended to elucidate, and unhappily puzzled and perplexed a great many more, than it has ever instructed. Every attempt to make English easy must be fruitless, that is not formed upon a different Plan, and such is the following short System of English Grammar.

A Short System OF English Grammar.

Of  GRAMMAR and it's Divisions.

Grammar is the Science of Letters or Language, and is the Art of Speaking and Writing properly.

It's Divisions are four;

Prosody treats of Pronunciation with respect of Accent, Time, and Quantity....