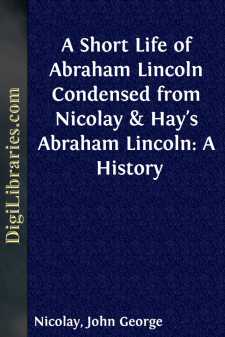 Abraham Lincoln, the sixteenth President of the United States, was born in a log cabin in the backwoods of Kentucky on the 12th day of February 1809. His father, Thomas Lincoln, was sixth in direct line of descent from Samuel Lincoln, who emigrated from England to Massachusetts in 1638. Following the prevailing drift of American settlement, these descendants had, during a century and a half, successively moved from Massachusetts to New Jersey, from New Jersey to Pennsylvania, from Pennsylvania to Virginia, and from Virginia to Kentucky; while collateral branches of the family eventually made homes in other parts of the West. In Pennsylvania and Virginia some of them had acquired considerable property and local prominence.

In the year 1780, Abraham Lincoln, the President's grandfather, was able to pay into the public treasury of Virginia "one hundred and sixty pounds, current money," for which he received a warrant, directed to the "Principal Surveyor of any County within the commonwealth of Virginia," to lay off in one or more surveys for Abraham Linkhorn, his heirs or assigns, the quantity of four hundred acres of land. The error in spelling the name was a blunder of the clerk who made out the warrant.

With this warrant and his family of five children—Mordecai, Josiah, Mary, Nancy, and Thomas—he moved to Kentucky, then still a county of Virginia, in 1780, and began opening a farm. Four years later, while at work with his three boys in the edge of his clearing, a party of Indians, concealed in the brush, shot and killed him. Josiah, the second son, ran to a neighboring fort for assistance; Mordecai, the eldest, hurried to the cabin for his gun, leaving Thomas, youngest of the family, a child of six years, by his father. Mordecai had just taken down his rifle from its convenient resting-place over the door of the cabin when, turning, he saw an Indian in his war-paint stooping to seize the child. He took quick aim through a loop-hole, shot, and killed the savage, at which the little boy also ran to the house, and from this citadel Mordecai continued firing at the Indians until Josiah brought help from the fort.

It was doubtless this misfortune which rapidly changed the circumstances of the family. Kentucky was yet a wild, new country. As compared with later periods of emigration, settlement was slow and pioneer life a hard struggle. So it was probably under the stress of poverty, as well as by the marriage of the older children, that the home was gradually broken up, and Thomas Lincoln became "even in childhood ... a wandering laboring boy, and grew up literally without education.... Before he was grown he passed one year as a hired hand with his uncle Isaac on Watauga, a branch of the Holston River." Later, he seems to have undertaken to learn the trade of carpenter in the shop of Joseph Hanks in Elizabethtown.

When Thomas Lincoln was about twenty-eight years old he married Nancy Hanks, a niece of his employer, near Beechland, in Washington County. She was a good-looking young woman of twenty-three, also from Virginia, and so far superior to her husband in education that she could read and write, and taught him how to sign his name. Neither one of the young couple had any money or property; but in those days living was not expensive, and they doubtless considered his trade a sufficient provision for the future. He brought her to a little house in Elizabethtown, where a daughter was born to them the following year.

During the next twelvemonth Thomas Lincoln either grew tired of his carpenter work, or found the wages he was able to earn insufficient to meet his growing household expenses. He therefore bought a little farm on the Big South Fork of Nolin Creek, in what was then Hardin and is now La Rue County, three miles from Hodgensville, and thirteen miles from Elizabethtown. Having no means, he of course bought the place on credit, a transaction not so difficult when we remember that in that early day there was plenty of land to be bought for mere promises to pay; under the disadvantage, however, that farms to be had on these terms were usually of a very poor quality, on which energetic or forehanded men did not care to waste their labor....