A Short History of Spain 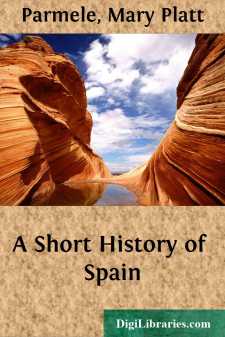 No name is more fraught with picturesque and romantic interest than that of the "Spanish Peninsula."

After finishing this rare bit of handiwork nature seems to have thrown up a great ragged wall, stretching from sea to sea, to protect it; and the Pyrenees have stood for ages a frowning barrier, descending toward France on the northern side from gradually decreasing heights—but on the Spanish side in wild disorder, plunging down through steep chasms, ravines, and precipices—with sharp cliffs towering thousands of feet skyward, which better than standing armies protect the sunny plains below.

But the "Spanish Peninsula," at the time we are about to consider, was neither "Spanish" nor was it a "peninsula." At the dawn of history this sunny corner of Europe was known as Iberia, and its people as Iberians.

Time has effaced all positive knowledge of this aboriginal race; but they are believed to have come from the south, and to have been allied to the Libyans, who inhabited the northern coast of Africa. In fact, Iberi in the Libyan tongue meant freeman; and Berber, apparently derived from that word, was the term by which all of these western peoples were known to the Ancient Egyptians.

But it is suspected that the Iberians found it an easy matter to flow into the land south of the Pyrenees, and that they needed no boats for the transit. There has always existed a tradition of the joining of the two continents, and now it is believed by geologists that an isthmus once really stretched across to the African coast at the narrowest point of the Straits, at a time when the waters of a Mediterranean gulf, and the waters flowing over the sands of Sahara, together found their outlet in the Indian Ocean.

There is also a tradition that the adventurous Phenicians, who are known to have been in Iberia as early as 1300 B.C., cut a canal through the narrow strip of land, and then built a bridge across the canal. But a bridge was a frail link by which to hold the mighty continents together. The Atlantic, glad of such an entrance to the great gulf beyond, must have rushed impetuously through, gradually widening the opening, and (may have) thus permanently severed Europe and Africa; drained the Sahara dry; transformed the Mediterranean gulf into a Mediterranean Sea; and created a "Spanish Peninsula."

How long this fair Peninsula was the undisturbed home of the Iberians no one knows. Behind the rocky ramparts of the Pyrenees they may have remained for centuries unconscious of the Aryan torrent which was flooding Western Europe as far as the British Isles. Nothing has been discovered by which we may reconstruct this prehistoric people and (perhaps) civilization. But their physical characteristics we are enabled to guess; for just as we find in Cornwall, England, lingering traces of the ancient Britons, so in the mountain fastnesses of northern Spain linger the Basques, who are by many supposed to be the last survivors of that mysterious primitive race.

The language of the Basques bears no resemblance to any of the Indo-European, nor indeed to any known tongue....