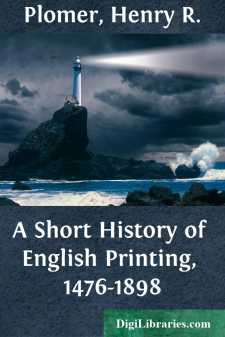 hen Mr. Plomer consented at my request to write a short history of English printing which should stop neither at the end of the fifteenth century, nor at the end of the sixteenth century, nor at 1640, but should come down, as best it could, to our own day, we were not without apprehensions that the task might prove one of some difficulty. How difficult it would be we had certainly no idea, or the book would never have been begun, and now that it is finished I would bespeak the reader's sympathies, on Mr. Plomer's behalf, that its inevitable shortcomings may be the more generously forgiven. If we look at what has already been written on the subject the difficulties will be more easily appreciated. In England, as in other countries, the period in the history of the press which is best known to us is, by the perversity of antiquaries, that which is furthest removed from our own time. Of all that can be learnt about Caxton the late Mr. William Blades set down in his monumental work nine-tenths, and the zeal of Henry Bradshaw, of Mr. Gordon Duff, and of Mr. E. J. L. Scott, has added nearly all that was lacking in this storehouse. Mr. Duff has extended his labours to the other English printers of the 15th century, giving in his Early English Printing (Kegan Paul, 1896) a conspectus, with facsimiles of their types, and in his privately printed Sandars Lectures presenting a detailed account of their work, based on the personal examination of every book or fragment from their presses which his unwearied diligence has been able to discover. Originality for this period being out of the question, Mr. Plomer's task was to select, under a constant sense of obligation, from the mass of details which have been brought together for this short period, and to preserve due proportion in their treatment.

Of the work of the printers of the next half-century our knowledge is much less detailed, and Mr. Plomer might fairly claim that he himself, by the numerous documents which he has unearthed at the Record Office and at Somerset House, has made some contributions to it of considerable value and interest. It is to his credit, if I may say so, that so little is written here of these discoveries. In a larger book the story of the brawl in which Pynson's head came so nigh to being broken, or of John Rastell's suit against the theatrical costumier who impounded the dresses used in his private theatre, would form pleasant digressions, but in a sketch of a large subject there is no room for digressions, and these personal incidents have been sternly ignored by their discoverer. Even his first love, Robert Wyer, has been allotted not more than six lines above the space which is due to him, and generally Mr. Plomer has compressed the story told in the Typographical Antiquities of Ames, Herbert, and Dibdin with much impartiality.

When we pass beyond the year 1556, which witnessed the incorporation of the Stationers' Company, Mr. Arber's Transcripts from the Company's Registers become the chief source of information, and Mr....