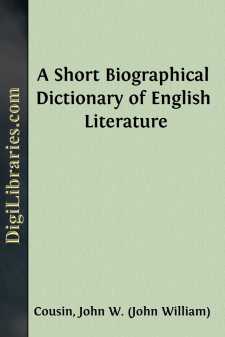 ABBOTT, JACOB (1803-1879). —Educationalist and miscellaneous author, b. at Hallowell, Maine, ed. at Bowdoin Coll. and Andover, entered the ministry of the Congregational Church, but was best known as an educationist and writer of religious and other books, mainly for the young. Among them are Beechnut Tales and The Rollo Books, both of which still have a very wide circulation.

ABBOTT, JOHN STEVENS CABOT (1805-1877). —Historian, etc., b. Brunswick, Maine, and ed. at Bowdoin Coll. He studied theology and became a minister of the Congregational Church at various places in Massachusetts and Connecticut. Owing to the success of a little work, The Mother at Home, he devoted himself, from 1844 onwards, to literature, and especially to historical writing. Among his principal works, which were very popular, are: History of Napoleon Bonaparte (1852-55), History of the Civil War in America (1863-66), and History of Frederick the Great (1871).

À BECKETT, GILBERT ABBOTT (1811-1856). —Comic writer, b. in London, the s. of a lawyer, and belonged to a family claiming descent from Thomas à Becket. Destined for the legal profession, he was called to the Bar. In addition to contributions to various periodicals and newspapers, including Punch, The Illustrated London News, The Times, and Morning Herald, he produced over fifty plays, many of which attained great popularity, and he also helped to dramatise some of Dickens' works. He is perhaps best known as the author of Comic History of England, Comic History of Rome, Comic Blackstone, etc. He was also distinguished in his profession, acted as a commissioner on various important matters, and was appointed a metropolitan police magistrate.

ABERCROMBIE, JOHN (1780-1844). —Physician and writer on mental science, s. of a minister, was b. at Aberdeen, and ed. at the Grammar School and Marischal College there. He studied medicine at Edinburgh, in which city he practised as a physician. He made valuable contributions to the literature of his profession, and pub. two works, Enquiry Concerning the Intellectual Powers (1830) and The Philosophy of the Moral Feelings (1833), which, though popular at the time of their publication, have long been superseded. For his services as a physician and philanthropist he received many marks of distinction, including the Rectorship of Marischal College.

ABERCROMBIE, PATRICK (1656-1716). —Antiquary and historian, was physician to James II. in 1685; he was a Jacobite and opposed the Union in various pamphlets. His chief work was Martial Achievements of the Scots Nation (1711-16).

ACTON, JOHN EMERICH EDWARD DALBERG-ACTON, 1ST LORD (1834-1902). —Historian, s. of Sir Richard A., and grandson of Sir John A., who was Prime Minister of Naples, was b. at Naples. He belonged to an ancient Roman Catholic family, and was ed. first at Oscott near Birmingham under Dr. (afterwards Card.) Wiseman. Thence he went to Edinburgh, where he studied privately, and afterwards to Munich, where he resided in the house of Dr....