A Selection of Books Published by Methuen and Co. Ltd. October 1910

by Methuen and Co. Ltd. 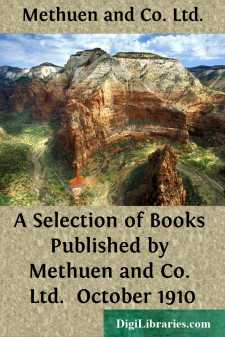 A SELECTION OF MESSRS. METHUEN'S PUBLICATIONS

In this Catalogue the order is according to authors. An asterisk denotes that the book is in the press.

Messrs. METHUEN'S books are kept in stock by all good booksellers. If there is any difficulty in seeing copies, Messrs. Methuen will be very glad to have early information, and specimen copies of any books will be sent on receipt of the published price plus postage for net books, and of the published price for ordinary books.

This Catalogue contains only a selection of the more important books published by Messrs. Methuen. A complete and illustrated catalogue of their publications may be obtained on application.

=Amherst (Lady).= A SKETCH OF EGYPTIAN HISTORY FROM THE EARLIEST TIMES TO THE PRESENT DAY. Illustrated. A New and Cheaper Issue. Demy 8vo. 7s. 6d. net.