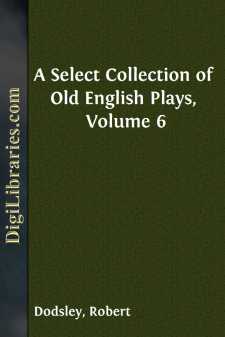 Four of the five ensuing Plays belong to a peculiar class of our early dramatic performances never yet especially noticed, nor sufficiently illustrated.

Many specimens have of late years been printed, and reprinted, of Miracle-plays, of Moral-plays, and of productions written in the most matured period of our dramatic literature; but little or nothing has been done to afford information respecting a species of stage-representation which constitutes a link between Moral-plays on the one hand, and Tragedy and Comedy on the other, as Tragedy and Comedy existed at the period when Shakespeare and his contemporaries were writers for various theatres in the metropolis. This deficiency it has been our main object to supply.

The four pieces to which we refer are neither plays which enforce a moral lesson by means of abstract impersonations only, nor are they dramas which profess to consist merely of scenes drawn from life, represented by real characters: they may be said to form a class by themselves, where characters both abstract and individual are employed in the same performance. The most remarkable drama of this intermediate kind, and the only one to which particular attention has been directed in modern times, is called "The Tragical Comedy of Appius and Virginia," which originally came out in 1575, and is reprinted in the [former and present] edition of "Dodsley's Old Plays" from the sole existing copy.[1] In it an important historical event is commemorated, and the hero, heroine, and some other principal agents are known characters; but they are mixed up with allegorical abstractions, and the representatives of moral qualities, while the Vice of the older stage is introduced, for the sake of diversifying the representation, and amusing popular audiences. The plot of this production has no religious application, and it was not written with any avowed moral purpose. In this respect, as well as in some other peculiarities, it is unlike the drama which stands first in the following sheets. Still, the general character is the same in both: in both we have a mixture of fact and fable, of reality and allegory, of individuality and abstraction, with the addition, in the latter case, of the enforcement of a lesson, for the instruction of those to whom it was addressed.

"The Conflict of Conscience," by Nathaniel Woodes, "Minister in Norwich," was originally printed in 1581, 4to, and it is reprinted in our volume from a copy in the possession of the Editor, which has the advantage of a Prologue. This introductory address is wanting in the exemplar in the British Museum; but it unquestionably belonged to the piece, because it also precedes a third copy, in the library of the Duke of Devonshire. We know not that this drama was ever republished, but the Registers of the Company of Stationers contain an entry by John Charlwood, dated 15th June 1587, of "a ballad of Mr Fraunces, an Italian, a doctor of law, who denied the Lord Jesus,"[2] which, as will be seen presently, probably refers to the same story, and, though called "a ballad," may possibly have been a reprint of "The Conflict of Conscience." The names borne by the different characters are all stated upon the title-page, with such a distribution of the parts as would enable six actors to represent the piece; and looking merely at this list, which we have exactly copied, it does not appear in what way the performance bears even a remote resemblance to tragedy or comedy....