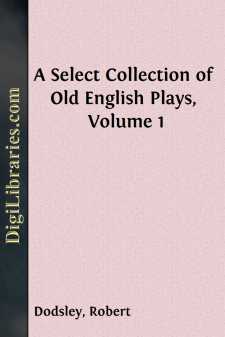 After the lapse of about half a century since the issue of the last edition of Dodsley's Select Collection of Old Plays,[1] and the admittance of that work into the honourable rank of scarce and dear books, it seemed a desirable thing to attempt, with such additional improvements as might be practicable or expedient, a revival of a publication which has been a favourite with the lovers of our early drama since its first publication more than a hundred years ago. Between 1744, the date of its original appearance, and 1825, it passed through three editions; and it may be remarked that the tendency in each successive edition has been to remodel the undertaking on the principle of rejecting plays which from time to time have been lifted up (so to speak) into the collected works of their respective authors, and to substitute for them plays which have either suffered unmerited obscurity in original and rare editions, or have lain so far scattered about in various other collections; and in the present instance that principle has been strictly adhered to.[2]

It is desirable that it should be seen precisely in what manner, and to what extent, the edition now offered differs from its predecessors as regards the contents. The points of variation are three: 1. Omissions; 2. Additions of pieces not included in the former editions; 3. Additional plays now first reprinted from the originals. The first division comprises the following productions which, since the last republication of Dodsley, have been taken up into the collected editions of their respective authors:—

The second and third characteristics of our book are the ADDITIONS, which, as we have stated, are of two kinds. In the first place, we may enumerate the dramas new to Dodsley's collection, though previously edited in a variety of forms: