A Second Book of Operas 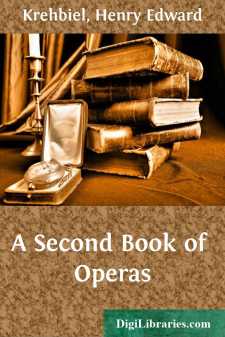 Whether or not the English owe a grudge to their Lord Chamberlain for depriving them of the pleasure of seeing operas based on Biblical stories I do not know. If they do, the grudge cannot be a deep one, for it is a long time since Biblical operas were in vogue, and in the case of the very few survivals it has been easy to solve the difficulty and salve the conscience of the public censor by the simple device of changing the names of the characters and the scene of action if the works are to be presented on the stage, or omitting scenery, costumes and action and performing them as oratorios. In either case, whenever this has been done, however, it has been the habit of critics to make merry at the expense of my Lord Chamberlain and the puritanicalness of the popular spirit of which he is supposed to be the official embodiment, and to discourse lugubriously and mayhap profoundly on the perversion of composers' purposes and the loss of things essential to the lyric drama.

It may be heretical to say so, but is it not possible that Lord Chamberlain and Critic have both taken too serious a view of the matter? There is a vast amount of admirable material in the Bible (historical, legendary or mythical, as one happens to regard it), which would not necessarily be degraded by dramatic treatment, and which might be made entertaining as well as edifying, as it has been made in the past, by stage representation. Reverence for this material is neither inculcated nor preserved by shifting the scene and throwing a veil over names too transparent to effect a disguise. Moreover, when this is done, there is always danger that the process may involve a sacrifice of the respect to which a work of art is entitled on its merits as such. Gounod, in collaboration with Barbier and Carre, wrote an opera entitled "La Reine de Saba." The plot had nothing to do with the Bible beyond the name of Sheba's Queen and King Solomon. Mr. Farnie, who used to make comic operetta books in London, adapted the French libretto for performance in English and called the opera "Irene." What a title for a grand opera! Why not "Blanche" or "Arabella"? No doubt such a thought flitted through many a careless mind unconscious that an Irene was a Byzantine Empress of the eighth century, who, by her devotion to its tenets, won beatification after death from the Greek Church. The opera failed on the Continent as well as in London, but if it had not been given a comic operetta flavor by its title and association with the name of the excellent Mr. Farnie, would the change in supposed time, place and people have harmed it?

A few years ago I read (with amusement, of course) of the metamorphosis to which Massenet's "Herodiade" was subjected so that it might masquerade for a brief space on the London stage; but when I saw the opera in New York "in the original package" (to speak commercially), I could well believe that the music sounded the same in London, though John the Baptist sang under an alias and the painted scenes were supposed to delineate Ethiopia instead of Palestine....