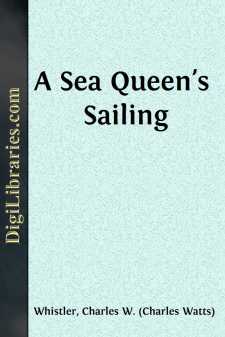 Chapter 1: The Old Chief And The Young.

The black smoke eddied and wavered as it rose over my father's burning hall, and then the little sea breeze took it and swept it inland over the heath-clad Caithness hills which I loved. Save for that black cloud, the June sky was bright and blue overhead, and in the sunshine one could not see the red tongues of flame that were licking up the last timbers of the house where I was born. Round the walls, beyond reach of smoke and heat, stood the foemen who had wrought the harm, and nearer the great door lay those of our men who had fallen at the first. There were foemen there also, for it had been a good fight.

At last the roof fell in with a mighty crash and uprush of smoke and sparks, while out of the smother reeled and staggered half a dozen men who had in some way escaped the falling timbers. I think they had been those who still guarded the doorway, being unwounded. But among them were not my father and brothers, and I knew that I was the last of my line by that absence.

It was not my fault that I was not lying with them under our roof yonder. I had headed a charge by a dozen of our best men, when it seemed that a charge might at least give time for the escape of the few women of the house to the glen. My father had bidden me, and we went, and did our best. We won the time we fought for, and that was all. Some of us got back to the hall, and the rest bided where they fell. As for me, I had been stunned by an axe blow, which my helm had turned, and came to myself to find that I was bound hand and foot, and set aside under the stable wall with two others of our men, captives also. Thence I must watch all that went on, helplessly, and after the roof fell I cared no more what should be done with me, for I was alone and desolate.

Nor did I know who these foemen were, or why they had fallen on us. In the gray of the morning they had come from inland, and were round the hall while we broke our fast. We had snatched our weapons as best we might, and done what we could, but the numbers against us were too great from the first.

They had come from inland, but they were not Scots. We were at peace with all the Caithness folk, and had been so for years, though we had few dealings with them. My father had won a place for himself and his men here on the Caithness shore in the days when Harald Harfager had set all Norway under him, for he was one of those jarls who would not bow to him, and left that old Norse land which I had never seen. Presently, he handselled peace for himself here by marriage with my mother, the daughter of a great Scots lord of the lands; and thereafter had built the hall, and made the haven, and won a few fields from the once barren hillside. And now we had been well to do, till this foe came and ended all.

They were not Norsemen either. The Orkney jarls were our friends, and for us Harald cared not. Norsemen on the Viking path we knew and welcomed, and being of that brotherhood ourselves, we had nothing to fear from them. It is true that we owned no king or overlord, but if the Scots king asked for scatt we paid it, grumbling, for the sake of peace....