A Sappho of Green Springs 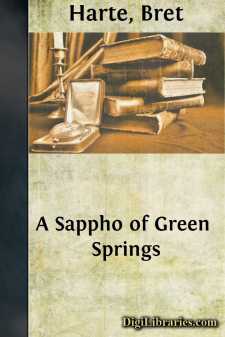 "Come in," said the editor.

The door of the editorial room of the "Excelsior Magazine" began to creak painfully under the hesitating pressure of an uncertain and unfamiliar hand. This continued until with a start of irritation the editor faced directly about, throwing his leg over the arm of his chair with a certain youthful dexterity. With one hand gripping its back, the other still grasping a proof-slip, and his pencil in his mouth, he stared at the intruder.

The stranger, despite his hesitating entrance, did not seem in the least disconcerted. He was a tall man, looking even taller by reason of the long formless overcoat he wore, known as a "duster," and by a long straight beard that depended from his chin, which he combed with two reflective fingers as he contemplated the editor. The red dust which still lay in the creases of his garment and in the curves of his soft felt hat, and left a dusty circle like a precipitated halo around his feet, proclaimed him, if not a countryman, a recent inland importation by coach. "Busy?" he said, in a grave but pleasant voice. "I kin wait. Don't mind ME. Go on."

The editor indicated a chair with his disengaged hand and plunged again into his proof-slips. The stranger surveyed the scant furniture and appointments of the office with a look of grave curiosity, and then, taking a chair, fixed an earnest, penetrating gaze on the editor's profile. The editor felt it, and, without looking up, said—

"I shall not be less busy this morning. I can listen."

"I want you to give me the name of a certain person who writes in your magazine."

The editor's eye glanced at the second right-hand drawer of his desk. It did not contain the names of his contributors, but what in the traditions of his office was accepted as an equivalent,—a revolver. He had never yet presented either to an inquirer. But he laid aside his proofs, and, with a slight darkening of his youthful, discontented face, said, "What do you want to know for?"

The question was so evidently unexpected that the stranger's face colored slightly, and he hesitated. The editor meanwhile, without taking his eyes from the man, mentally ran over the contents of the last magazine. They had been of a singularly peaceful character. There seemed to be nothing to justify homicide on his part or the stranger's. Yet there was no knowing, and his questioner's bucolic appearance by no means precluded an assault. Indeed, it had been a legend of the office that a predecessor had suffered vicariously from a geological hammer covertly introduced into a scientific controversy by an irate professor.

"As we make ourselves responsible for the conduct of the magazine," continued the young editor, with mature severity, "we do not give up the names of our contributors. If you do not agree with their opinions"—

"But I DO," said the stranger, with his former composure, "and I reckon that's why I want to know who wrote those verses called 'Underbrush,' signed 'White Violet,' in your last number....