A Review of the Resources and Industries of the State of Washington, 1909 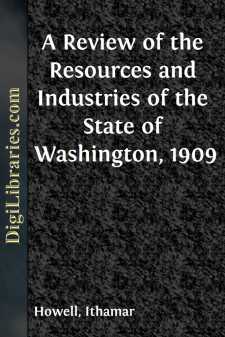 OFFICE OF THEBUREAU OF STATISTICS, AGRICULTURE AND IMMIGRATION,OLYMPIA, WASHINGTON, JUNE 1, 1909.

This publication represents an effort to place before the general public, and particularly the visitors at the Alaska-Yukon-Pacific Exposition, a brief description of the principal resources and industries of the State of Washington.

Its imperfections may be accounted for largely by reason of the fact that funds for the purpose did not become available until the first day of April of the current year. This necessitated unusual haste in securing and preparing the material upon which the pamphlet is based. However, we have endeavored to deal conservatively and fairly with the various subjects under consideration, and to present all the information possible within the limits of the space at our disposal.

Our purpose has been to supply the reader with an outline of the salient facts which account for the marvelous growth and development which the commonwealth is enjoying. To go largely into detail within the scope of a pamphlet of this size would be, manifestly, an impossibility. We might readily exhaust our available space in dealing with one industry or in describing a single county. Details, therefore, have been necessarily and purposely avoided.

We have sought to bring the entire state within the perspective of the reader, leaving him to secure additional facts through personal investigation. Along this line, attention is called to the list of commercial organizations and local officials presented Page 4 in the statistical portion of this report. Nearly all the larger communities of the state maintain organizations, equipped to supply detailed facts relating to their particular locality. Much valuable information may be obtained on application to these organizations or to local officials.

An expression of appreciation is due those who have assisted us by supplying information and collecting photographs for use in this publication. Without such aid the completion of the pamphlet would have been materially delayed.

The State of Washington as now constituted, was, prior to 1853, a portion of the Territory of Oregon. During the year mentioned, a new territory was carved from the old Oregon boundaries, which the statesmen of that day evidently believed was marked by destiny for the achievement of great things, for they conferred upon it the name of Washington.

That our state, thus highly distinguished, has already demonstrated itself worthy of the exalted name, so happily bestowed upon it, the most carping critic must admit. With a population now reaching up toward a million and a half, and with all the forces that make for industrial, commercial and agricultural supremacy in full swing, and gathering new momentum yearly, Washington is moving onward and upward toward a position among the very elect of our great sisterhood of states....