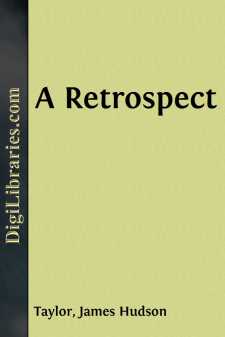 CHAPTER I THE POWER OF PRAYER THE following account of some of the experiences which eventually led to the formation of the China Inland Mission, and to its taking the form in which it has been developed, first appeared in the pages of China's Millions. Many of those who read it there asked that it might appear in separate form. Miss Guinness incorporated it in the Story of the China Inland Mission, a record which contained the account of God's goodness to the beginning of 1894. But friends still asking for it in pamphlet form, for wider distribution, this edition is brought out.

Much of the material was taken from notes of addresses given in China during a conference of our missionaries; this will account for the direct and narrative form of the papers, which it has not been thought necessary to change.

It is always helpful to us to fix our attention on the God-ward aspect of Christian work; to realise that the work of God does not mean so much man's work for God, as God's own work through man. Furthermore, in our privileged position of fellow-workers with Him, while fully recognising all the benefits and blessings to be bestowed on a sin-stricken world through the proclamation of the Gospel and spread of the Truth, we should never lose sight of the higher aspect of our work—that of obedience to God, of bringing glory to His Name, of gladdening the heart of our God and Father by living and serving as His beloved children.

Many circumstances connected with my own early life and service presented this aspect of work vividly to me; and as I think of some of them, I am reminded of how much the cause of missions is indebted to many who are never themselves permitted to see the mission field—many, it may be, who are unable to give largely of their substance, and who will be not a little surprised in the Great Day to see how much the work has been advanced by their love, their sympathy, and their prayers.

For myself, and for the work that I have been permitted to do for God, I owe an unspeakable debt of gratitude to my beloved and honoured parents, who have passed away and entered into rest, but the influence of whose lives will never pass away.

Many years ago, probably about 1830, the heart of my dear father, then himself an earnest and successful evangelist at home, was deeply stirred as to the spiritual state of China by reading several books, and especially an account of the travels of Captain Basil Hall. His circumstances were such as to preclude the hope of his ever going to China for personal service, but he was led to pray that if God should give him a son, he might be called and privileged to labour in the vast needy empire which was then apparently so sealed against the truth. I was not aware of this desire or prayer myself until my return to England, more than seven years after I had sailed for China; but it was very interesting then to know how prayer offered before my birth had been answered in this matter.

All thought of my becoming a missionary was abandoned for many years by my dear parents on account of the feebleness of my health....