A Residence in France With an Excursion Up the Rhine, and a Second Visit to Switzerland 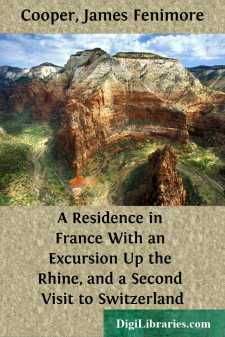 RESIDENCE IN FRANCE. LETTER I.

Your speculations concerning the influence of the late revolution, on the social habits of the French, are more ingenious than true. While the mass of this nation has obtained less than they had a right to expect by the severe political convulsions they have endured, during the last forty years, they have, notwithstanding, gained something in their rights; and, what is of far more importance, they have gained in a better appreciation of those rights, as well as in the knowledge of the means to turn them to a profitable and practical account. The end will show essential improvements in their condition, or rather the present time shows it already. The change in polite society has been less favourable, although even this is slowly gaining in morals, and in a healthier tone of thought. No error can be greater, than that of believing France has endured so much, without a beneficial return.

In making up my opinions of the old regime, I have had constant recourse to General Lafayette for information. The conversations and anecdotes already sent you, will have prepared you for the fine tone, and perfect candour, with which he speaks even of his bitterest enemies; nor can I remember, in the many confidential and frank communications with which I have been favoured, a single instance where, there has been the smallest reason to suspect he has viewed men through the medium of personal antipathies and prejudices. The candour and simplicity of his opinions form beautiful features in his character; and the bienséance of his mind (if one may use such an expression) throws a polish over his harshest strictures, that is singularly adapted to obtain credit for his judgment.

Your desire to know more of the private life of this extraordinary man, is quite natural; but he has been so long before the public, that it is not easy to say anything new. I may, however, give you a trait or two, to amuse you.

I have seen more of him this winter than the last, owing to the circumstance of a committee of Americans, that have been appointed to administer succour to the exiled Poles, meeting weekly at my house, and it is rare indeed that he is not present on these benevolent occasions. He has discontinued his own soirées, too; and, having fewer demands on his time, through official avocations, I gain admittance to him during his simple and quiet dinners, whenever it is asked....