A Reply to Dr. Lightfoot's Essays 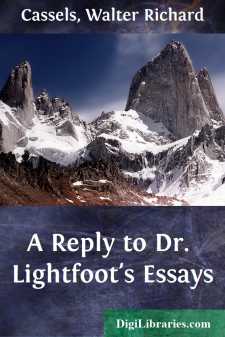 I sincerely rejoice that Dr. Lightfoot has recovered from his recent illness. Of this restoration the vigorous energy of his preface to his republication of the Essays on Supernatural Religion affords decided evidence, and I hope that no refutation of this inference at least may be possible, however little we may agree on other points.

It was natural that Dr. Lightfoot should not be averse to preserving the more serious part of these Essays, the preparation of which cost him so much time and trouble; and the republication of this portion of his reply to my volumes, giving as it does the most eloquent and attractive statement of the ecclesiastical case, must be welcome to many. I cannot but think that it has been an error of judgment and of temper, however, to have rescued from an ephemeral state of existence and conferred literary permanence on much in his present volume, which is mere personal attack on his adversary and a deliberate attempt to discredit a writer with whom he pretends to enter into serious argument. A material part of the volume is composed of such matter. I cannot congratulate him on the spirit which he has displayed. Personally I am profoundly indifferent to such attempts at detraction, and it is with heretical amusement that I contemplate the large part which purely individual and irrelevant criticism is made to play in stuffing out the proportions of orthodox argument. In the first moment of irritation, I can well understand that hard hitting, even below the belt, might be indulged in against my work by an exasperated theologian—for even a bishop is a man,—but that such attacks should not only be perpetuated, but repeated after years of calm reflection, is at once an error and a compliment for which I was not prepared. Anything to prevent readers from taking up Supernatural Religion: any misrepresentation to prejudice them against its statements. Elaborate literary abuse against the author is substituted for the effective arguments against his reasoning which are unhappily wanting. In the later editions of my work, I removed everything that seemed likely to irritate or to afford openings for the discussion of minor questions, irrelevant to the main subject under treatment. Whilst Dr. Lightfoot in many cases points out such alterations, he republishes his original attacks and demonstrates the disparaging purpose of his Essays by the reiterated condemnation of passages which had so little to do with the argument that they no longer exist in the complete edition of Supernatural Religion. Could there be more palpable evidence of the frivolous and superficial character of his objections? It is not too much to say that in no part of these Essays has Dr. Lightfoot at all seriously entered upon the fundamental proposition of Supernatural Religion. He has elaborately criticised notes and references: he has discussed dates and unimportant details: but as to the question whether there is any evidence for miracles and the reality of alleged Divine Revelation, his volume is an absolute blank....