by S. A. (Simon Ansley) Ferrall 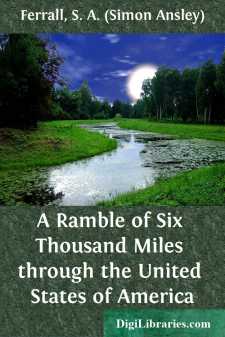 Following the plan I had laid down for myself, I sought and found a goodly Yankee merchantman, bound for and belonging to the city of New York. Our vessel was manned with a real American crew, that is, a crew, of which scarcely two men are of the same nation—which conveys a tolerably correct notion of the population of the United States. The crew consisted of one Russian, one German, one Italian, one Scotchman, one Newfoundlander, one Irishman, two Englishmen, two New Englanders, and two Negros—the cook and steward. The seamen of America are better paid, and better protected, than those of any other nation; but work harder, and must understand their duty well. Indeed if we had not had a good crew, our ship, being old, might have suffered severely.

In selecting this ship, in addition to accommodations, I only took into account her build; and so far was not disappointed, for when she could carry sail, she scudded along in gallant style; but with ships as with horses, the more they have done, the less they have to do.

I had a strong impression on my mind that a person travelling in America as a professed tourist, would be unable to form a correct estimate of the real character and condition of the people; for, from their great nationality, they would be likely to show him the best side of every thing. Of this kind of ostentation I very soon had a slight proof. Our ship left port in gallant trim, but had no sooner gained the open sea, than all hands were employed in stowing away the finery, and covering the rigging with mats—even the very cabin doors were taken off the hinges, and brass knobs and other ornaments which appeared to have been fixtures, were unshipped and deposited below, where they remained until our approach to New York, when the finery was again displayed, and all was placed once more in statu quo.

For the first twelve days we had rather pleasant weather, and nothing remarkable occurred, unless a swallow coming on board completely exhausted with flying, fatigue made it so tame that it suffered itself to be caressed; it however popped into the coop, and the ducks literally gobbled it up alive. The ducks were, same day, suffered to roam about the decks, and the pigs fell foul of one of them, and eat the breast off it. Passing the cabouse, I heard the negro steward soliloquising, and on looking in, perceived him cutting a hen's throat with the most heartfelt satisfaction, as he grinned and exclaimed, by way of answer to its screams, "Poor feller! I guess I wouldn't hurt you for de world;" I could not help thinking with Leibnitz, that most sapient of philosophers, that this is the best of all possible worlds.

On the thirteenth day we encountered a heavy gale, which continued to increase for four successive days. During this period we were unable to carry more canvass than was barely necessary to render the vessel manageable. A heavy gale, for the first time, is rather interesting than otherwise: the novelty of the sea's appearance—the anxiety of the crew and officers—the promptitude with which commands are given and executed—and the excitement produced by the other incidental occurrences, tend to make even a storm, when encountered in open sea, by no means destitute of pleasing interest. During this gale, the sailors appeared to be more than ordinarily anxious only upon one occasion, and then only for a minute—the circumstance was not calculated to create alarm in the mind of a person totally ignorant of nautical affairs, but being somewhat of a sailor, I understood the danger tolerably well....