A Queens Delight The Art of Preserving, Conserving and Candying. As also, A right Knowledge of making Perfumes, and Distilling the most Excellent Waters. 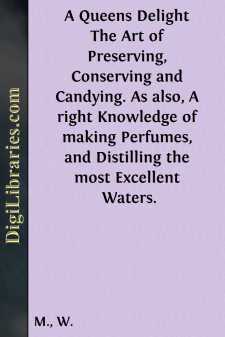 A QUEENS DELIGHT OF Conserves, and Preserves, Candying and Distilling Waters. To preserve white Pear Plums, or green.

Take the Plums, and cut the stalk off, and wipe them then take the just weight of them in Sugar, then put them in a skillet of water, and let them stand in and scald, being close covered till they be tender, they must not seeth, when they be soft lay them in a Dish, and cover them with a cloth, and stew some of the the Sugar in the glass bottom, and put in the Plums, strewing the sugar over till all be in, then let them stand all night, the next day put them in a pan, and let them boil a pace, keeping them clean scummed, & when your Plums look clear, your syrup will gelly, and they are enough. If your Plums be ripe, peel off the skins before you put them in the glass; they will be the better and clearer a great deal to dry, if you will take the Plums white; if green, do them with the rinds on.

Take Grapes when they be almost through ripe, and cut the stalks off, and stone them in the side, and as fast as you can stone them strew Sugar on them; you must take to every pound of Grapes three quarters of a pound of Sugar, then take some of the sower Grapes; and wring the juyce of them, and put to every pound of Grapes two spoonfuls of juyce, then set them on the fire, and still lift up the pan and shake it round, for fear of burning to, then set them on again, & when the Sugar is melted, boil them as fast as you can possible, and when they look very clear, and the syrup is somewhat thick, they are enough.

Take a pair and coar them, and to every pound of your equal weights in Sugar and Quince, take a wine pint of water; put them together, and boil them as fast as you can uncovered; and this way you may also preserve Pippins white as you do Quinces.

Take a pound of Respass, a pound of fine Sugar, a quarter of a pint of the juyce of Respass, strew the Sugar under and above the Respass, sprinkle the juyce all on them, set them on a clear fire, let them boil as soft as is possible, till the syrup will gelly, then take them off, let them stand till they be cold, then put them in a glass. After this manner is the best way.

Take fair Pippins, and boil them in fair water till they be somewhat tender, then take them out, and peel off the skins and put them into a fair earthen pot, and cover them till they be cold, then make the syrup with fair water and Sugar, seeth it, and scum it very clean, then being almost cold, put in your Pippins, so boil them softly together, put in as much rind of Oranges as you think will tast them, if you have no Oranges take whole Cinamon and Cloves, so boil them high enough to keep them all the year.

Take Pippins, Apricocks, Pear-Plums, or Peaches when they be green, scald them in hot water, and peel them or scrape them, put them into another water not so hot as the first, then boil them very tender, take the weight of them in Sugar, put to it as much water as will make a syrup to cover them; then boil them something leisurely, and take them up, then boil the syrup till it be somewhat thick, that it will batten on a dish side, and when they are cold, put them together....