A Protegee of Jack Hamlin's and Other Stories 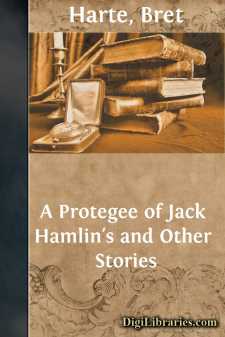 A PROTEGEE OF JACK HAMLIN'S. I.

The steamer Silveropolis was sharply and steadily cleaving the broad, placid shallows of the Sacramento River. A large wave like an eagre, diverging from its bow, was extending to either bank, swamping the tules and threatening to submerge the lower levees. The great boat itself—a vast but delicate structure of airy stories, hanging galleries, fragile colonnades, gilded cornices, and resplendent frescoes—was throbbing throughout its whole perilous length with the pulse of high pressure and the strong monotonous beat of a powerful piston. Floods of foam pouring from the high paddle-boxes on either side and reuniting in the wake of the boat left behind a track of dazzling whiteness, over which trailed two dense black banners flung from its lofty smokestacks.

Mr. Jack Hamlin had quietly emerged from his stateroom on deck and was looking over the guards. His hands were resting lightly on his hips over the delicate curves of his white waistcoat, and he was whistling softly, possibly some air to which he had made certain card-playing passengers dance the night before. He was in comfortable case, and his soft brown eyes under their long lashes were veiled with gentle tolerance of all things. He glanced lazily along the empty hurricane deck forward; he glanced lazily down to the saloon deck below him. Far out against the guards below him leaned a young girl. Mr. Hamlin knitted his brows slightly.

He remembered her at once. She had come on board that morning with one Ned Stratton, a brother gambler, but neither a favorite nor intimate of Jack's. From certain indications in the pair, Jack had inferred that she was some foolish or reckless creature whom "Ed" had "got on a string," and was spiriting away from her friends and family. With the abstract morality of this situation Jack was not in the least concerned. For himself he did not indulge in that sort of game; the inexperience and vacillations of innocence were apt to be bothersome, and besides, a certain modest doubt of his own competency to make an original selection had always made him prefer to confine his gallantries to the wives of men of greater judgment than himself who had. But it suddenly occurred to him that he had seen Stratton quickly slip off the boat at the last landing stage. Ah! that was it; he had cast away and deserted her. It was an old story. Jack smiled. But he was not greatly amused with Stratton.

She was very pale, and seemed to be clinging to the network railing, as if to support herself, although she was gazing fixedly at the yellow glancing current below, which seemed to be sucked down and swallowed in the paddle-box as the boat swept on. It certainly was a fascinating sight—this sloping rapid, hurrying on to bury itself under the crushing wheels. For a brief moment Jack saw how they would seize anything floating on that ghastly incline, whirl it round in one awful revolution of the beating paddles, and then bury it, broken and shattered out of all recognition, deep in the muddy undercurrent of the stream behind them....