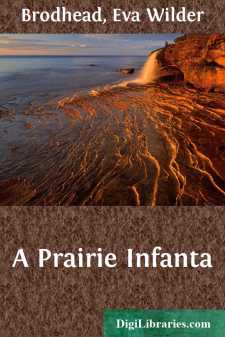 At the first glance there appeared to be nothing unusual in the scene confronting Miss Jane Combs as she stood, broad and heavy, in her doorway that May morning, looking up and down the single street of the little Colorado mining-town.

Jane's house was broad and heavy also—a rough, paintless "shack," which she had built after her own ideals on a treeless "forty" just beyond the limits of Aguilar. It was like herself in having nothing about it calculated to win the eye.

Jane, with her rugged, middle-aged face, baggy blouse, hob-nailed shoes and man's hat, was so unfeminine a figure as she plowed and planted her little vega, that some village wag had once referred to her as "Annie Laurie." Because of its happy absurdity the name long clung to Jane; but despite such small jests every one respected her sterling traits,—every one, that is, except Señora Vigil, who lived hard by in a mud house like a bird's nest, and who cherished a grudge against her neighbor.

For, years before, when Jane's "forty" was measured off by the surveyor, it had been developed that the Vigil homestead was out of bounds, and that a small strip of its back yard belonged in the Combs tract. Jane would have waived her right, but the surveyor said that the land office could not "muddle up" the records in any such way; she must take her land. And Jane had taken it, knowing, however, that thereafter even the youngest Vigil, aged about ten months, would regard her as an enemy.

Just now, too, as Alejandro Vigil, a ragged lad with a scarlet cap on his black head, went by, driving his goats to pasture, he had said "rogue!" under his breath. Jane sighed at the word, and her eyes followed him sadly up the road, little thinking her glance was to take in something which should print itself forever in her memory, and make this day different from all other days.

In the clear sun everything was sharply defined. From the Mexican end of town,—the old "plaza,"—which antedated coal-mines and Americanisms, gleamed the little gold cross of the adobe Church of San Antonio. Around it were green, tall cottonwoods and the straggling mud-houses and pungent goat-corrals of its people. Toward the cañon rose the tipple and fans of the Dauntless colliery, banked in slack and slate, and surrounded by paintless mine-houses, while to the right swept the ugly shape of the company's store. The mine end of the town was not pretty, nor was it quiet, like the plaza. Just at present the whistle was blowing, and throngs of miners were gathering at the mouth of the slope. From above clamored the first "trip" of cars. Day and its work had begun.

Alejandro's red cap was a mere speck in the cañon, and his herd was sprinkled, like bread-crumbs, over the slaty hills. But over in the Vigil yard the numberless other little Vigils were to be seen, and Jane, as she looked, began to see that some sort of excitement was stirring them. The señora herself stood staring, wide-eyed and curious. Ana Vigil, her eldest girl, was pointing....