A Practical Guide to Self-Hypnosis 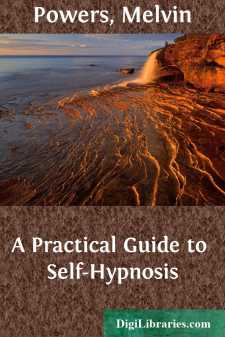 All of us like to think that our actions and reactions are a result of logical thought processes, but the fact is that suggestion influences our thinking a great deal more than logic. Consciously or unconsciously, our feelings about almost everything are largely molded by ready-made opinions and attitudes fostered by our mass methods of communication. We cannot buy a bar of soap or a filtered cigarette without paying tribute to the impact of suggestion. Right or wrong, most of us place more confidence in what "they" say than we do in our own powers of reason. This is the basic reason why psychiatrists are in short supply. We distrust our own mental processes and want an expert to tell us what to think and feel.

Despite this tendency to adopt our attitudes from others, man has always been dimly aware that he can influence his own destiny by directing his thoughts and actions into constructive channels. He has always, to some extent, known that his mind exerts a powerful influence on his body, and that thoughts can have harmful or helpful effects on his emotional and physical health. The ancient Egyptian sleep temples and the attempts by early physicians to drive evil spirits out of the body were both attempts to influence the body through the mind.

The unprecedented sale of The Power of Positive Thinking by Norman Vincent Peale and other inspirational literature proves that millions of modern people recognize the efficacy of constructive thoughts. What most of them do not recognize is that they are capable of implanting these beneficial thoughts in their own minds without reference to any outside agencies. This can be done through self-hypnosis.

In modern society we have many cults, religions and methodologies which have mental discipline as their goal. The best example of a methodology is psychosomatic medicine which deals with the interrelationship of the mind and body in the production of mental or physical illness. The rapid growth of hypnosis in the last few years is another example, and it is gratifying to see that the emphasis in this field is now shifting from hetero-hypnosis to self-hypnosis.

Self-hypnosis is a highly suggestible state wherein the individual can direct suggestions to himself. It is a powerful tool in any therapeutic process, and highly motivated subjects can parallel the success of hetero-hypnosis through their own efforts. Self-hypnosis can be used as a palliative agent and can even afford lasting results in many areas of the organism. Self-hypnosis can alleviate distressing symptoms, substitute strong responses for weak responses, help overcome bad habits, create good habits and help one's power of concentration. The total personality is eventually changed to the point where it can function adequately in an increasingly difficult environment.

In learning self-hypnosis, the subject does not relinquish control of himself as is commonly believed. Actually, more control is gained. Self-sufficiency and self-confidence are inevitable results....