A Practical Enquiry into the Philosophy of Education 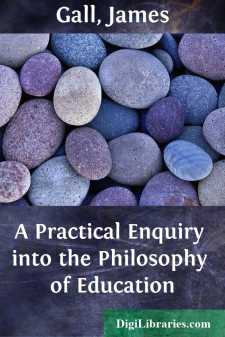 CHAP. I. On the Importance of establishing the Science of Educationon a solid Foundation.

Education is at present obviously in a transition state. The public mind has of late become alive to the importance of the subject; and all persons are beginning to feel awake to the truth, that something is yet wanting to insure efficiency and permanence to the labours of the teacher. The public will not be satisfied till some decided change has taken place; and many are endeavouring to grope their way to something better. It is with an earnest desire to help forward this great movement, that the writer of the following pages has been induced to publish the result of much study, and upwards of thirty years' experience, in the hope that it may afford at least some assistance in directing the enquiries of those who are prosecuting the same object.

On entering upon this investigation, it will be of use to keep in mind, that all the sciences have, at particular periods of their history, been in the same uncertain and unsettled position, as that which Education at present occupies; and that each of them has in its turn, had to pass through an ordeal, similar to that which education is about to undergo. They have triumphantly succeeded; and their subsequent rapid advancement is the best proof that they are now placed on a solid and permanent foundation. It is of importance, therefore, in attempting to forward the science of education, that we should profit by the experience of those who have gone before us. They succeeded by a strict observation of facts, and a stern rejection of every species of mere supposition and opinion;—by an uncompromising hostility to prejudice and selfishness, and a fearless admission of truth wherever it was discovered. Such must be the conduct of the Educationist, if he expects to succeed in an equal degree. The history of astronomy as taught by astrologers, and of chemistry in the hands of the alchymist, should teach both the lovers and the fearers of change an important lesson. These pretended sciences being mere conjectures, were of use to nobody; and yet the boldness with which they were promulgated, and the confidence with which they were received, had the effect of suppressing enquiry, and shutting out the truth for several generations. Similar may be the effects of errors in education, and similar the danger of too easily admitting them. The adoption of plausible theories, or of erroneous principles, must lead into innumerable difficulties; and should they be hastily patronized, and authoritatively promulgated, the improvement of this first and most important of the sciences may be retarded for a century to come.

The other sciences, during the last half century, have advanced with amazing rapidity. This has been the result of a strict adherence to well established facts, and their legitimate inferences.—A docile subjection of the mind to the results of experiment, and a candid confession and abandonment of fallacies, have characterized every benefactor of the sciences;—and the science of education must be advanced by an adherence to the same principles....