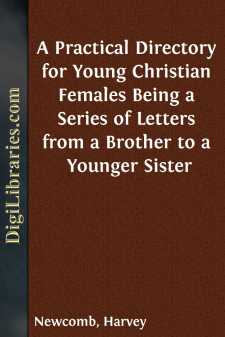 LETTER I. The Christian's Mark.

Ever since the death of our dear mother, I have felt a deep interest in your welfare. And your being left, while young, in a measure dependent upon me, has increased my affection for you. You have now left my roof, to sojourn among strangers. You have little knowledge of the world, and your religious experience has been short. I trust, therefore, you will cordially receive a few hints from one whose fraternal affection has been strengthened by many peculiar circumstances, and who, for many years, has not ceased to remember you in his prayers.

Young Christians, when they first obtain peace and comfort in Christ, are prone to think the struggle over, the victory won. But nothing can be farther from the truth. They have but just enlisted under the banner of the great Captain of their salvation, in a warfare which will never cease till they shall have obtained the final victory over sin and death, and entered into the joy of their Lord. This mistake often leads them to be satisfied with what they have already experienced, and to cease that constant inward strife and earnestness, which they exercised while under conviction, before they found "joy and peace in believing." They see such a heavenly sweetness in divine things, that they think it impossible they should "lose the relish all their days." This begets self-confidence, and they trust in their own strength to keep where they are, instead of eagerly pressing forward, in the strength of Christ, after higher attainments. The consequence is, they soon lose their lively sense of divine things, backslide from God, and become cold and barren in their religious affections. A little child, when it first begins to walk, is safe while it keeps hold of the hand of its mother, or faithful nurse. But, when it begins to feel confident of its own strength, and lets go its hold, it soon totters and falls. So with the Christian. He is safe while he keeps a firm hold of Christ's hand. But the moment he attempts to walk alone, he stumbles and falls.

The Scriptures represent the grace of God in the heart, as a growing principle. It is compared to a mustard-seed, which is the least of all seeds. But, when it springs up, it rises and spreads its branches, till it becomes the greatest of all herbs. The beauty and appropriateness of this figure will not be appreciated, unless we take into consideration the luxuriant growth of plants in Eastern countries. The Jews have a fable of a mustard-tree whose branches were so extensive as to cover a tent. There are two things that no one would expect to see, in the growth of such a plant: (1.) To spring at once into full maturity. (2.) To become stationary in its growth, before it arrives at maturity. If it ceases to grow, it must wither away and die....