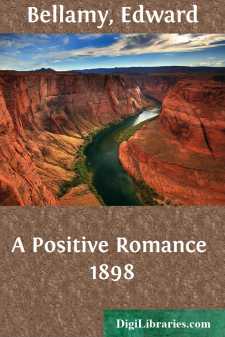 My friend Hammond is a bachelor, and lives in chambers in New York. Whenever we meet on my occasional visits to the city, he insists on my spending the night with him. On one of these occasions we had been at the opera during the evening, and had witnessed an ovation to a beautiful and famous singer. We had been stirred by the enthusiasm of the audience, and on our walk home fell to discussing a theme suggested by the scene; namely, the tendency of man to assume a worshipful attitude towards woman, and the reason for it. Was it merely a phase of the passional relation between the sexes, or had it some deeper and more mysterious significance?

When I mentioned the former idea, Hammond demanded why this tendency was not reciprocal between the sexes. As a matter of fact, while women showed endless devotion and fondness for men, their feeling was without the strain of adoration. Particular men's qualities of mind or heart might excite the enthusiastic admiration of women, but such admiration was for cause, and in no way confounded with the worshipful reverence which it was man's instinct to extend to woman as woman, with secondary reference to her qualities as a particular person. No fact in the relations of men and women, he declared, was more striking than this contrast in their mutual attitudes. It was the feminine, not the masculine, ideal which supplied the inspiration of art and the aroma of literature, which was found enshrined in the customs and common speech of mankind. To this I replied that man, being the dominant sex, had imposed his worship on the race as a conquering nation, its gods on the conquered. He, not woman, had been the creator of the art, the literature, and the language which were dedicated to her. Had woman been the dominant sex, the reverse might have happened, and man been obliged to stand upon a pedestal and be worshiped.

Hammond laughed, but declared that I was all wrong. Man's tendency to worship woman, while naturally blending with his passional attraction towards her, did not spring from the instinct of sex, but from the instinct of race,—a far deeper and generally unrecognized impulse. Even though woman should become some day the dominant sex, man need suffer no apprehension of being worshiped. His modesty would be respected.

Some time later, when we had cozily established ourselves before a sea-coal fire in Hammond's quarters, with divers creature comforts at hand for one of our usual symposiums, the subject came up again; and under conditions so favorable to discursiveness our talk took a wide range.

"By the way," said I, apropos of some remark he had made, "talking about the adoration of woman, did not that crack-brained Frenchman, Auguste Comte, propose something of the sort as a feature of his 'Religion of Humanity'?"

"I wonder," I said, "whether that feature of his scheme was ever actually practiced by his followers. I should like to get a chance to ask a Positivist about that, if indeed there are any in America."

Hammond smoked in silence for some time, and finally said, quietly, "Possibly I might tell you something about it myself."

"Hello!" I exclaimed. "How long since you have been a Positivist?"

"About twenty-five years," was the matter-of-fact reply.

"A Positivist of twenty-five years' standing," I ejaculated, "and never told of it! Why have you hid your light under a bushel all this while?"

"I said that it was twenty-five years since I had been a Positivist," replied Hammond; "as long, in fact, as it is since I have been a sophomore. Both experiences belonged to the same year of my college course, and, perhaps you may infer, to the same stage of intellectual development....