A Portrait of Old George Town 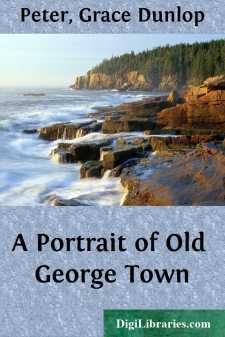 IT IS not at all in my mind to write a history of Georgetown. Several have been written, but I do want, very, very much, to paint a portrait of this dear old town of my birth where my parents, my grandparents, great-grandfathers and one great-great-grandfather lived, and which I love so dearly.

A portrait, partly of its physical features, its streets, its houses and gardens, some of which still exist in their pristine glory but, alas, many of which have gone the way of so-called progress. In place of the dignified houses of yore, of real architectural beauty, stand rows of cheap dwellings or stores, erected mostly in the seventies and eighties when architecture was at its worst. In 1895 it was that the old names of the streets were taken away and from then on we've been just an adjunct of Washington.

Not only of its physical side do I wish to tell, but I want to paint a picture of the kind of people who lived here, from the beginning up through the gay nineties—nearly one hundred and fifty years. Of the kind of things they did, their work, their play, their thoughts and their beliefs, for the character of the town, like human beings, was formed largely by their beliefs, and these old Scotsmen—for they were greatly in the majority—laid a great deal of stress on their Presbyterian form of Christianity. Witness the oath that had to be taken by the Flour Inspector on February 24, 1772: "I, Thomas Brannan, do declare that I do believe that there is not any trnsubstantiation in the Sacrament of the Lord's Supper or in the elements of bread and wine, at or after the consecration thereof by any person whatsoever."

And yet, with this strong prejudice, they coöperated and lived on friendly terms with the Roman Catholics who, very soon after the taking of this particular oath, founded their college and established their convent for teaching young girls.

Dr. Balch counselled well when he besought his people: "Let us resolve to be social rather than fashionable, and generous instead of extravagant."

All down through the years and to this day I think that has been the hall-mark of the real Georgetonian. A great deal of fashion has come to Georgetown, as in the early days of the bringing of the government when Washington City was a waste and almost entirely one big mud puddle, and the foreign ministers and many high in our government sought the comfort and dignity of this town, which was then far from young.

Again in later years there has been an exodus across Rock Creek of men and women high in the government; in the diplomatic corps; in industry; in literature and the arts; lured hither by the quiet dignity of the old-time atmosphere.

There are today living in Georgetown descendants of nearly every one of the original makers of the town, and all through these years the old friendships still persist and flourish.

It is impossible for me to express my thanks to all the people who have helped me and made it possible to write this book....