A Popular History of France from the Earliest Times, Volume 5 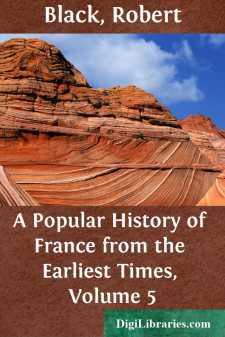 On the 2d of August, 1589, in the morning, upon his arrival in his quarters at Meudon, Henry of Navarre was saluted by the Protestants King of France. They were about five thousand in an army of forty thousand men. When, at ten o'clock, he entered the camp of the Catholics at St. Cloud, three of their principal leaders, Marshal d'Aumont, and Sires d'Humieres and de Givry, immediately acknowledged him unconditionally, as they had done the day before at the death-bed of Henry III., and they at once set to work to conciliate to him the noblesse of Champagne, Picardy, and Ile-de-France. "Sir," said Givry, "you are the king of the brave; you will be deserted by none but dastards." But the majority of the Catholic leaders received him with such expressions as, "Better die than endure a Huguenot king!" One of them, Francis d'O, formally declared to him that the time had come for him to choose between the insignificance of a King of Navarre and the grandeur of a King of France; if he pretended to the crown, he must first of all abjure. Henry firmly rejected these threatening entreaties, and left their camp with an urgent recommendation, to them to think of it well before bringing dissension into the royal army and the royal party which were protecting their privileges, their property, and their lives against the League. On returning to his quarters, he noticed the arrival of Marshal de Biron, who pressed him to lay hands without delay upon the crown of France, in order to guard it and save it. But, in the evening of that day and on the morrow, at the numerous meetings of the lords to deliberate upon the situation, the ardent Catholics renewed their demand for the exclusion of Henry from the throne if he did not at once abjure, and for referring the election of a king to the states-general. Biron himself proposed not to declare Henry king, but to recognize him merely as captain-general of the army pending his abjuration. Harlay de Sancy vigorously maintained the cause of the Salic law and the hereditary rights of monarchy. Biron took him aside and said, "I had hitherto thought that you had sense; now I doubt it. If, before securing our own position with the King of Navarre, we completely establish his, he will no longer care for us. The time is come for making our terms; if we let the occasion escape us, we shall never recover it." "What are your terms?" asked Sancy. "If it please the king to give me the countship of Perigord, I shall be his forever." Sancy reported this conversation to the king, who promised Biron what he wanted.

Though King of France for but two days past, Henry IV. had already perfectly understood and steadily taken the measure of the situation. He was in a great minority throughout the country as well as the army, and he would have to deal with public passions, worked by his foes for their own ends, and with the personal pretensions of his partisans. He made no mistake about these two facts, and he allowed them great weight; but he did not take for the ruling principle of his policy and for his first rule of conduct the plan of alternate concessions to the different parties and of continually humoring personal interests; he set his thoughts higher, upon the general and natural interests of France as he found her and saw her....