A Popular Account of Dr. Livingstone's Expedition to the Zambesi and its tributaries And of the Discovery of Lakes Shirwa and Nyassa, 1858-1864 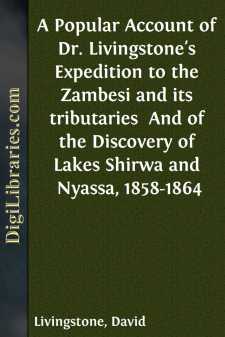 It has been my object in this work to give as clear an account as I was able of tracts of country previously unexplored, with their river systems, natural productions, and capabilities; and to bring before my countrymen, and all others interested in the cause of humanity, the misery entailed by the slave-trade in its inland phases; a subject on which I and my companions are the first who have had any opportunities of forming a judgment.  The eight years spent in Africa, since my last work was published, have not, I fear, improved my power of writing English; but I hope that, whatever my descriptions want in clearness, or literary skill, may in a measure be compensated by the novelty of the scenes described, and the additional information afforded on that curse of Africa, and that shame, even now, in the 19th century, of an European nation,—the slave-trade.

I took the “Lady Nyassa” to Bombay for the express purpose of selling her, and might without any difficulty have done so; but with the thought of parting with her arose, more strongly than ever, the feeling of disinclination to abandon the East Coast of Africa to the Portuguese and slave-trading, and I determined to run home and consult my friends before I allowed the little vessel to pass from my hands.  After, therefore, having put two Ajawa lads, Chuma and Wakatani, to school under the eminent missionary the Rev. Dr. Wilson, and having provided satisfactorily for the native crew, I started homewards with the three white sailors, and reached London July 20th, 1864.  Mr. and Mrs. Webb, my much-loved friends, wrote to Bombay inviting me, in the event of my coming to England, to make Newstead Abbey my headquarters, and on my arrival renewed their invitation: and though, when I accepted it, I had no intention of remaining so long with my kind-hearted generous friends, I stayed with them until April, 1865, and under their roof transcribed from my own and my brother’s journal the whole of this present book.  It is with heartfelt gratitude I would record their unwearied kindness.  My acquaintance with Mr. Webb began in Africa, where he was a daring and successful hunter, and his continued friendship is most valuable because he has seen missionary work, and he would not accord his respect and esteem to me had he not believed that I, and my brethren also, were to be looked on as honest men earnestly trying to do our duty.

The Government have supported the proposal of the Royal Geographical Society made by my friend Sir Roderick Murchison, and have united with that body to aid me in another attempt to open Africa to civilizing influences, and a valued private friend has given a thousand pounds for the same object.  I propose to go inland, north of the territory which the Portuguese in Europe claim, and endeavour to commence that system on the East which has been so eminently successful on the West Coast; a system combining the repressive efforts of H.M. cruisers with lawful trade and Christian Missions—the moral and material results of which have been so gratifying.  I hope to ascend the Rovuma, or some other river North of Cape Delgado, and, in addition to my other work, shall strive, by passing along the Northern end of Lake Nyassa and round the Southern end of Lake Tanganyika, to ascertain the watershed of that part of Africa.  In so doing, I have no wish to unsettle what with so much toil and danger was accomplished by Speke and Grant, but rather to confirm their illustrious discoveries....