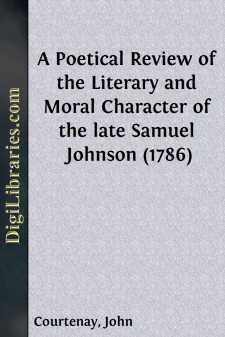 The eighteenth century was an age addicted to gossiping about its literary figures. This addiction was nowhere better demonstrated than by the countless reflections, sermons, poems, pamphlets, biographical sketches, and biographies about Samuel Johnson. The most productive phase of this activity commenced almost immediately after Johnson's death in December, 1784, and continued into the next century.

One item of Johnsoniana which seems to have been neglected, perhaps because Birkbeck Hill did not include it in his Johnsonian Miscellanies, is A Poetical Review of the Literary and Moral Character of the Late Samuel Johnson, L.L.D., with Notes. This poem of three hundred and four lines was written by John Courtenay (1741-1816). First published in the spring of 1786 by Charles Dilly, the poem went through three editions in the same year. Its popularity was determined less by Courtenay's poetic talent than by public interest in the Johnsoniana that flooded the market. Courtenay's literary output, though scanty, was diverse; he wrote light verse, character sketches, and essays, including two controversial pieces in support of the French Revolution. It is apparent, however, that for him writing was hardly more than an avocation.

Despite his notoriety as a controversial member of Parliament, as a first-rate wit, and as an intimate friend of Boswell, Courtenay remains a shadowy figure. References to him occur often in the last volumes of Boswell's journal, but few of them are particularly revealing. Courtenay evidently never met Johnson; indeed, the anonymous author of A Poetical Epistle from the Ghost of Dr. Johnson to His Four Friends: The Rev. Mr. Strahan. James Boswell, Esq. Mrs. Piozzi. J. Courtenay, Esq. M.P. (1786) censures Courtenay for writing about a man whom he did not know. Although a member of the Literary Club, Courtenay did not join this group until four years after Johnson died. He was proposed on 9 December 1788, by Sir Joshua Reynolds (Boswell seconded), and elected two weeks later, on 23 December, during the same meeting at which it was decided to erect a monument to Dr. Johnson in Westminster Abbey.

If, then, Courtenay did not belong to the Johnson circle, he became, shortly after Johnson's death, a valued member of the Boswell circle. Courtenay must have met Boswell in the spring or early summer of 1785, about thirteen years after arriving in England from his native Ireland in the service of Viscount Townshend. Boswell's first reference to Courtenay occurs in his journal under 7 July 1785. It is clear from this entry that he had met Courtenay earlier, but subsequent references indicate that the acquaintance was a fresh one.

From the start Boswell enjoyed Courtenay's company. In the first place, Boswell appreciated Courtenay's talent in conversation. Although he seldom recorded specimens of Courtenay's talk, Boswell was generous in his praise of his wit. "Courtenay's wit," he wrote, "sparkles more than almost any man's." On 26 March 1788, Boswell described him as a "valuable addition" to a meeting of the Essex Head Club which he attended as Boswell's guest....