A Plea for Captain John Brown Read to the citizens of Concord, Massachusetts on Sunday evening, October thirtieth, eighteen fifty-nine 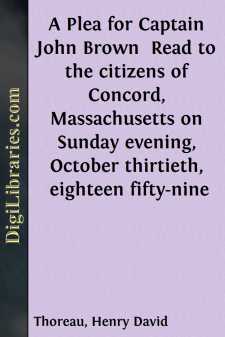 I trust that you will pardon me for being here. I do not wish to force my thoughts upon you, but I feel forced myself. Little as I know of Captain Brown, I would fain do my part to correct the tone and the statements of the newspapers, and of my countrymen generally, respecting his character and actions. It costs us nothing to be just. We can at least express our sympathy with, and admiration of, him and his companions, and that is what I now propose to do.

First, as to his history. I will endeavor to omit, as much as possible, what you have already read. I need not describe his person to you, for probably most of you have seen and will not soon forget him. I am told that his grandfather, John Brown, was an officer in the Revolution; that he himself was born in Connecticut about the beginning of this century, but early went with his father to Ohio. I heard him say that his father was a contractor who furnished beef to the army there, in the war of 1812; that he accompanied him to the camp, and assisted him in that employment, seeing a good deal of military life,—more, perhaps, than if he had been a soldier; for he was often present at the councils of the officers. Especially, he learned by experience how armies are supplied and maintained in the field,—a work which, he observed, requires at least as much experience and skill as to lead them in battle. He said that few persons had any conception of the cost, even the pecuniary cost, of firing a single bullet in war. He saw enough, at any rate, to disgust him with a military life; indeed, to excite in his a great abhorrence of it; so much so, that though he was tempted by the offer of some petty office in the army, when he was about eighteen, he not only declined that, but he also refused to train when warned, and was fined for it. He then resolved that he would never have anything to do with any war, unless it were a war for liberty.

When the troubles in Kansas began, he sent several of his sons thither to strengthen the party of the Free State men, fitting them out with such weapons as he had; telling them that if the troubles should increase, and there should be need of his, he would follow, to assist them with his hand and counsel. This, as you all know, he soon after did; and it was through his agency, far more than any other's, that Kansas was made free.

For a part of his life he was a surveyor, and at one time he was engaged in wool-growing, and he went to Europe as an agent about that business. There, as everywhere, he had his eyes about him, and made many original observations. He said, for instance, that he saw why the soil of England was so rich, and that of Germany (I think it was) so poor, and he thought of writing to some of the crowned heads about it. It was because in England the peasantry live on the soil which they cultivate, but in Germany they are gathered into villages, at night. It is a pity that he did not make a book of his observations.

I should say that he was an old-fashioned man in respect for the Constitution, and his faith in the permanence of this Union. Slavery he deemed to be wholly opposed to these, and he was its determined foe.

He was by descent and birth a New England farmer, a man of great common-sense, deliberate and practical as that class is, and tenfold more so. He was like the best of those who stood at Concord Bridge once, on Lexington Common, and on Bunker Hill, only he was firmer and higher principled than any that I have chanced to hear of as there....