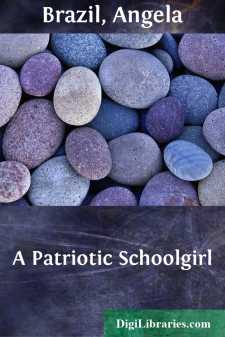 "Dona, are you awake? Donakins! I say, old sport, do stir yourself and blink an eye! What a dormouse you are! D'you want shaking? Rouse up, you old bluebottle, can't you?"

"I've been awake since five o'clock, and it's no use thumping me in the back," grunted an injured voice from the next bed. "It's too early yet to get up, and I wish you'd leave me alone."

The huskiness and general chokiness of the tone were unmistakable. Marjorie leaned over and took a keen survey of that portion of her sister's face which was not buried in the pillow.

"Oh! the atmosphere's damp, is it?" she remarked. "Dona, you're ostriching! For goodness' sake brace up, child, and turn off the water-works! I thought you'd more pluck. If you're going to arrive at Brackenfield with a red nose and your eyes all bunged up, I'll disown you, or lose you on the way. Crystal clear, I will! I'll not let you start in a new school nicknamed 'Niobe', so there! Have a caramel?"

Dona sat up in bed, and arrested her tears sufficiently to accept the creature comfort offered her. As its consistency was decidedly of a stick-jaw nature, the mingled sucking and sobbing which followed produced a queer combination.

"You sound like a seal at the Zoo," Marjorie assured her airily. "Cheer oh! I call it a stunt to be going to Brackenfield. I mean to have a top-hole time there, and no mistake!"

"It's all very well for you!" sighed Dona dolefully. "You've been at a boarding-school before, and I haven't; and you are not shy, and you always get on with people. You know I'm a mum mouse, and I hate strangers. I shall just endure till the holidays come. It's no use telling me to brace up, for there's nothing to brace about."

In the bedroom where the two girls lay talking every preparation had been made for a journey. Two new trunks, painted respectively with the initials "M. D. A." and "D. E. A.", stood side by side with the lids open, filled to the brim, except for sponge-bags and a few other items, which must be put in at the last. Weeks of concentrated thought and practical work on the part of Mother, two aunts, and a dressmaker had preceded the packing of those boxes, for the requirements of Brackenfield seemed numerous, and the list of essential garments resembled a trousseau. There were school skirts and blouses, gymnasium costumes, Sunday dresses, evening wear and party frocks, to say nothing of underclothes, and such details as gloves, shoes, ties, ribbons, and handkerchiefs, writing-cases, work-baskets, books, photos, and knick-knacks. Two hand-bags, each containing necessaries for the first night, stood by the trunks, and two umbrellas, with two hockey-sticks, were already strapped up with mackintoshes and winter coats.

For both the girls this morning would make a new and very important chapter in the story of their lives. Marjorie had, indeed, already been at boarding-school, but it was a comparatively small establishment, not to be named in the same breath with a place so important as Brackenfield, and giving only a foretaste of those experiences which she expected to encounter in a wider circle. She had been tolerably popular at Hilton House, but she had made several mistakes which she was determined not to repeat, and meant to be careful as to the first impressions which she produced upon her new schoolfellows. Marjorie, at fifteen and a half, was a somewhat problematical character. In her childhood she had been aptly described as "a little madam", and it was owing to the very turbulent effect of her presence in the family that she had been packed off early to school, "to find her level among other girls, and leave a little peace at home", as Aunt Vera expressed it. "Finding one's level" is generally rather a stormy process; so, after four years of give-and-take at Hilton House, Marjorie was, on the whole, not at all sorry to leave, and transfer her energies to another sphere....