A Pair of Clogs 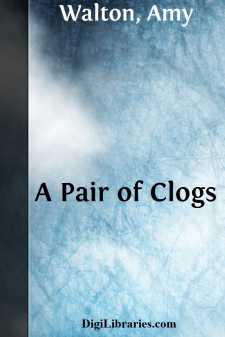 “My! What a pretty pair of clogs baby’s gotten!”

The street was narrow and very steep, and paved with round stones; on each side of it were slate-coloured houses, some high, some low; and in the middle of it stood baby, her curly yellow head bare, and her blue cotton frock lifted high with both fat hands. She could not speak, but she wanted to show that on her feet were tiny new clogs with bright brass tips.

She stopped in front of all her acquaintances, men, women, children, and even dogs. Each of them, except the last, made much the same remark, and she then toddled cheerfully on, until nearly everyone in the village of Haworth knew of this wonderful new thing.

The baby’s mother lived in Haworth, but all day long she had to work in the town of Keighley down below in the valley, for she was a factory-girl. From the hillside you could see the thick veil of smoke, never lifted, which hung over the tall chimneys and grey houses; the people there very seldom saw the sky clear and blue, but up at Haworth the wind blew freshly off the wide moor just above, and there was nothing to keep away the sunshine. This was the reason that Maggie Menzies still lived there, after she had taken to working in the factory; it was a long walk to and from Keighley, but it was healthier for the “li’le lass” to sleep in the fresh air. Everything in Maggie’s life turned upon that one small object; the “li’le lass” was her one treasure, her one golden bit of happiness, the reason why she cared to see the sun shine, or to eat, or drink, or rest, or to be alive at all. Except for the child she was alone in the world, for her husband had been killed in an accident two years ago, when the baby was only a month old. Since then she had been Maggie’s one thought and care; no one who has not at some time in their lives spent all their affection on a single thing or person can at all understand what she felt, or how strong her love was. It made all her troubles and hardships easy merely to think of the child; just to call to mind the dimples, and yellow hair, and fat hands, was enough to make her deaf to the whirr and rattle of the restless machinery, and the harsh tones of the overseer. When she began her work in the morning she said to herself, “I shall see her in the evening;” and when it was unusually tiresome during the day, and things went very wrong, she could be patient and even cheerful when she remembered “it’s fur her.” The factory-girls with boisterous good-nature had tried to make her sociable when she first came; they invited her to stroll with them by the river in the summer evenings, to stand and gossip with them at the street corners, to join in their parties of pleasure on Sundays. But they soon found it was of no use; Maggie’s one idea, when work was over, was to throw her little checked shawl over her head, and turn her steps quickly towards a certain house in a narrow alley near the factory, for there, under the care of a neighbour, she left her child during the day....