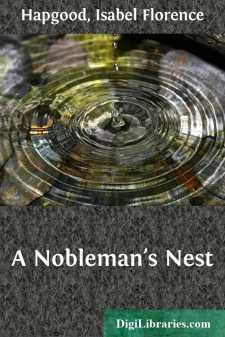 The brilliant, spring day was inclining toward the evening, tiny rose-tinted cloudlets hung high in the heavens, and seemed not to be floating past, but retreating into the very depths of the azure.

In front of the open window of a handsome house, in one of the outlying streets of O * * * the capital of a Government, sat two women; one fifty years of age, the other seventy years old, and already aged.

The former was named Márya DmГѓ­trievna KalГѓ­tin. Her husband, formerly the governmental procurator, well known in his day as an active official—a man of energetic and decided character, splenetic and stubborn—had died ten years previously. He had received a fairly good education, had studied at the university, but, having been born in a poverty-stricken class of society, he had early comprehended the necessity of opening up a way for himself, and of accumulating money. Márya DmГѓ­trievna had married him for love; he was far from uncomely in appearance, he was clever, and, when he chose, he could be very amiable. Márya DmГѓ­trievna (her maiden name had been Péstoff) had lost her parents in early childhood, had spent several years in Moscow, in a government educational institute, and, on returning thence, had lived fifty versts from O * * *, in her native village, Pokróvskoe, with her aunt and her elder brother. This brother soon removed to Petersburg on service, and kept his sister and his aunt on short commons, until his sudden death put an end to his career. Márya DmГѓ­trievna inherited Pokróvskoe, but did not live there long; during the second year after her marriage to KalГѓ­tin, who succeeded in conquering her heart in the course of a few days, Pokróvskoe was exchanged for another estate, much more profitable, but ugly and without a manor-house, and, at the same time, KalГѓ­tin acquired a house in the town of O * * *, and settled down there permanently with his wife. A large garden was attached to the house; on one side, it joined directly on to the open fields, beyond the town. KalГѓ­tin,—who greatly disliked the stagnation of the country,—had evidently made up his mind, that there was no reason for dragging out existence on the estate. Márya DmГѓ­trievna, many a time, in her own mind regretted her pretty Pokróvskoe, with its merry little stream, its broad meadows, and verdant groves; but she opposed her husband in nothing, and worshipped his cleverness and knowledge of the world. But when, after fifteen years of married life, he died, leaving a son and two daughters, Márya DmГѓ­trievna had become so wonted to her house, and to town life, that she herself did not wish to leave O * * *.

In her youth, Márya DmГѓ­trievna had enjoyed the reputation of being a pretty blonde, and at the age of fifty her features were not devoid of attraction, although they had become somewhat swollen and indefinite in outline. She was more sentimental than kind, and even in her mature age she had preserved the habits of her school-days; she indulged herself, was easily irritated, and even wept when her ways were interfered with; on the other hand, she was very affectionate and amiable, when all her wishes were complied with, and when no one contradicted her....