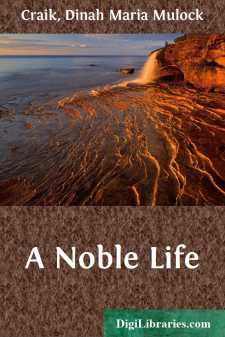 Many years ago, how many need not be recorded, there lived in his ancestral castle, in the far north of Scotland, the last Earl of Cairnforth.

You will not find his name in "Lodge's Peerage," for, as I say, he was the last earl, and with him the title became extinct. It had been borne for centuries by many noble and gallant men, who had lived worthily or died bravely. But I think among what we call "heroic" lives—lives the story of which touches us with something higher than pity, and deeper than love—there never was any of his race who left behind a history more truly heroic than he.

Now that it is all over and done—now that the soul so mysteriously given has gone back unto Him who gave it, and a little green turf in the kirk-yard behind Cairnforth Manse covers the poor body in which it dwelt for more than forty years, I feel it might do good to many, and would do harm to none, if I related the story—a very simple one, and more like a biography than a tale—of Charles Edward Stuart Montgomerie, last Earl of Cairnforth.

He did not succeed to the title; he was born Earl of Cairnforth, his father having been drowned in the loch a month before, the wretched countess herself beholding the sight from her castle windows. She lived but to know she had a son and heir—to whom she desired might be given his father's name: then she died—more glad than sorry to depart, for she had loved her husband all her life, and had only been married to him a year. Perhaps, had she once seen her son, she might have wished less to die than to live, if only for his sake; however, it was not God's will that this should be. So, at two days old, the "poor little earl"—as from his very birth people began compassionately to call him—was left alone in the world, without a single near relative or connection, his parents having both been only children, but with his title, his estate, and twenty thousand a year.

Cairnforth Castle is one of the loveliest residences in all Scotland. It is built on the extremity of a long tongue of land which stretches out between two salt-water lochs—Loch Beg, the "little," and Loch Mhor, the "big" lake. The latter is grand and gloomy, shut in by bleak mountains, which sit all round it, their feet in the water, and their heads in mist and cloud. But Loch Beg is quite different. It has green, cultivated, sloping shores, fringed with trees to the water's edge, and the least ray of sunshine seems always to set it dimpling with wavy smiles. Now and then a sudden squall comes down from the chain of mountains far away beyond the head of the loch, and then its waters begin to darken—just like a sudden frown over a bright face; the waves curl and rise, and lash themselves into foam, and any little sailing boat, which has been happily and safely riding over them five minutes before, is often struck and capsized immediately. Thus it happened when the late earl was drowned.

The minister—the Rev. Alexander Cardross—had been sailing with him; had only just landed, and was watching the boat crossing back again, when the squall came down....