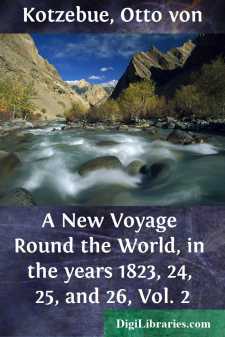 The wind, which continued favourable to us as far as the Northern Tropic, was succeeded by a calm that lasted twelve days. The ocean, as far as the eye could reach, was as smooth as a mirror, and the heat almost insupportable. Sailors only can fully understand the disagreeableness of this situation. The activity usual on shipboard gave place to the most wearisome idleness. Every one was impatient; some of the men felt assured that we should never have a wind again, and wished for the most violent storm as a change.

One morning we had the amusement of watching two great sword-fish sunning themselves on the surface of the water. I sent out a boat, in the hope that the powerful creatures would, in complaisance, allow us the sport of harpooning them, but they would not wait; they plunged again into the depths of the sea, and we had disturbed their enjoyments in vain.

Our water-machine was several times let down, even to the depth of a thousand fathoms: on the surface, the temperature was 24°, and at this depth, only 2° of Reaumur.

On the 22nd of May, the anniversary of our frigate's leaving Stopel, we got a fresh easterly wind, which carried us forward pretty quickly on the still smooth surface of the sea.

On the 1st of June, when in latitude 42° and longitude 201°, and consequently opposite the coast of Japan, we descried a red stripe in the water, about a mile long and a fathom broad. In passing over it we drew up a pail-full, and found that its colour was occasioned by an infinite number of crabs, so small as to be scarcely distinguishable by the naked eye.

We now began daily to experience increasing inconveniences from the Northern climate. The sky, hitherto so serene, became gloomy and covered with storm-clouds, which seldom threatened in vain; we were, besides, enveloped in almost perpetual mists, bounding our prospect to a few fathoms. In a short time, the temperature of the air had fallen from 24° to 3°. So sudden a change is always disagreeable, and often dangerous. We had to thank the skill and attention of our physician, Dr. Siegwald, that it did not prove so to us. Such rough weather is not common to the latitude we were in at that season; but it is peculiar to the Japanese coast even in summer. Whales and storm-birds showed themselves in great numbers, reminding us that we were hastening to the North, and were already far from the luxuriant groves of the South-Sea islands.

The wind continued so favourable, that on the 7th of June we could already see the high mountains of Kamtschatka in their winter clothing. Their jagged summits reaching to the heavens, crested with everlasting snow, which glitters in the sunbeams, while their declivities are begirt with clouds, give a magnificent aspect to this coast. On the following day, we reached Awatscha Bay, and in the evening anchored in the harbour of St. Peter and St. Paul.

The great peninsula of Kamtschatka, stretching to the river Anadir on the North, and South to the Kurilian Islands, bathed on the east by the ocean, and on the west by the sea of Ochotsk, is, like many men, better than its reputation....