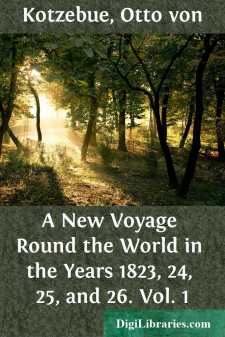 In the month of March of the year 1823, I was appointed by his Imperial Majesty Alexander the First, of glorious memory, to the command of a ship, at that time unfinished, but named the Predpriatie (the Enterprise). She had been at first destined for a voyage purely scientific, but circumstances having occurred which rendered it necessary to change the object of the expedition, I was ordered to take in at Kronstadt a cargo to Kamtschatka, and to sail from the latter place to the north-west coast of America, in order to protect the Russian American Company from the smuggling carried on there by foreign traders. On this station my ship was to remain for one year, and then, being relieved by another, to return to Kronstadt. The course to be followed, both in going and returning, was left entirely to my own discretion.

On the first of May, the ship, whose Russian name, Predpriatie, I shall for the future omit, was declared complete. She was the first vessel built in Russia under a roof, (a very excellent plan,) was the size of a frigate of a middling rank, and, that she might not be unnecessarily burdened, was provided with only twenty-four six-pounders.

My crew consisted of Lieutenants Kordinkoff, Korsakoff, Bordoschewitsch, and Pfeifer; the Midshipmen Gekimoff, Alexander von Moller, Golowin, Count Heiden, Tschekin, Murawieff, Wukotitsch, and Paul von Moller; the Mates, Grigorieff, Gekimoff, and Simokoff, eight petty officers, and one hundred and fifteen sailors. We were accompanied by Professors Eschscholz and Lenz as Naturalists; Messrs. Preus and Hoffman as Astronomer and Mineralogist; and Messrs. Victor and von Siegwald as Chaplain and Physician; so that, in all, we reckoned one hundred and forty-five persons.

We were richly stored with astronomical and other scientific instruments: we possessed two pendulum apparatus, and a theodolite made expressly for our expedition by the celebrated Reichenbach. This valuable instrument was executed with wonderful precision, and was of the greatest use in our astronomical observations on shore.

In June the ship arrived at Kronstadt, and on the 14th of July (old style, according to which all reckonings will be made in this voyage,) she lay in the harbour fully equipped and ready to sail. On that day the cannon of the fortress and of the fleet in the roads announced the arrival of the Emperor, whom we had the pleasure of receiving on board our vessel.

His Majesty, after a close examination of the ship, honoured us by the assurance of his imperial satisfaction; the sailors received a sum of money, and I and my officers a written expression of thanks.

With the gracious cordiality peculiar to him, the amiable monarch wished us a happy voyage, and retired followed by our enthusiastic blessings.

We did not then anticipate that we had seen him for the last time. On our return, his lofty spirit had ascended to the regions of bliss: from whence he looks down on his beloved brother, rejoicing to be even surpassed by him in the virtues of a sovereign.

We remained in the roads of Kronstadt till the 28th of July, when, after a painful parting from a beloved and affectionate wife, the wind proving favourable, I gave the order to weigh anchor.

The whole crew was in high spirits, and full of hope: the task of weighing anchor and setting sail was executed with alertness and rapidity; and as the ship began her course, cutting the foaming billows, the men joyfully embraced each other, and with loud huzzas expressed their hearty wishes for the success of our undertaking. To me this scene was highly gratifying. Such a disposition in a crew towards an enterprise from which toils and dangers must be anticipated, afforded a satisfactory presumption that their courage and spirits would not fail when they should be really called into exercise....