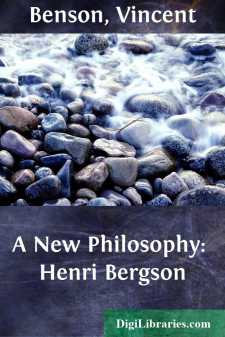 There is a thinker whose name is today on everybody's lips, who is deemed by acknowledged philosophers worthy of comparison with the greatest, and who, with his pen as well as his brain, has overleapt all technical obstacles, and won himself a reading both outside and inside the schools. Beyond any doubt, and by common consent, Mr Henri Bergson's work will appear to future eyes among the most characteristic, fertile, and glorious of our era. It marks a never-to-be-forgotten date in history; it opens up a phase of metaphysical thought; it lays down a principle of development the limits of which are indeterminable; and it is after cool consideration, with full consciousness of the exact value of words, that we are able to pronounce the revolution which it effects equal in importance to that effected by Kant, or even by Socrates.

Everybody, indeed, has become aware of this more or less clearly. Else how are we to explain, except through such recognition, the sudden striking spread of this new philosophy which, by its learned rigorism, precluded the likelihood of so rapid a triumph?

Twenty years have sufficed to make its results felt far beyond traditional limits: and now its influence is alive and working from one pole of thought to the other; and the active leaven contained in it can be seen already extending to the most varied and distant spheres: in social and political spheres, where from opposite points, and not without certain abuses, an attempt is already being made to wrench it in contrary directions; in the sphere of religious speculation, where it has been more legitimately summoned to a distinguished, illuminative, and beneficent career; in the sphere of pure science, where, despite old separatist prejudices, the ideas sown are pushing up here and there; and lastly, in the sphere of art, where there are indications that it is likely to help certain presentiments, which have till now remained obscure, to become conscious of themselves. The moment is favourable to a study of Mr Bergson's philosophy; but in the face of so many attempted methods of employment, some of them a trifle premature, the point of paramount importance, applying Mr Bergson's own method to himself, is to study his philosophy in itself, for itself, in its profound trend and its authenticated action, without claiming to enlist it in the ranks of any cause whatsoever.

Mr Bergson's readers will undergo at almost every page they read an intense and singular experience. The curtain drawn between ourselves and reality, enveloping everything including ourselves in its illusive folds, seems of a sudden to fall, dissipated by enchantment, and display to the mind depths of light till then undreamt, in which reality itself, contemplated face to face for the first time, stands fully revealed. The revelation is overpowering, and once vouchsafed will never afterwards be forgotten.

Nothing can convey to the reader the effects of this direct and intimate mental vision. Everything which he thought he knew already finds new birth and vigour in the clear light of morning: on all hands, in the glow of dawn, new intuitions spring up and open out; we feel them big with infinite consequences, heavy and saturated with life....