A Narrative Of The Mutiny, On Board His Majesty's Ship Bounty; And The Subsequent Voyage Of Part Of The Crew, In The Ship's Boat 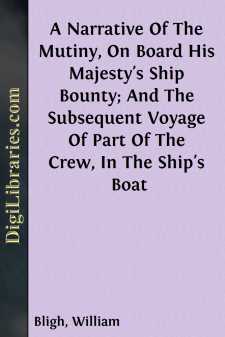 The following Narrative is only a part of a voyage undertaken for the purpose of conveying the Bread-fruit Tree from the South Sea Islands to the West Indies. The manner in which this expedition miscarried, with the subsequent transactions and events, are here related. This part of the voyage is not first in the order of time, yet the circumstances are so distinct from that by which it was preceded, that it appears unnecessary to delay giving as much early information as possible concerning so extraordinary an event. The rest will be laid before the Public as soon as it can be got ready; and it is intended to publish it in such a manner, as, with the present Narrative, will make the account of the voyage compleat.

At present, for the better understanding the following pages, it is sufficient to inform the reader, that in August, 1787, I was appointed to command the Bounty, a ship of 215 tons burthen, carrying 4 six-pounders, 4 swivels, and 46 men, including myself and every person on board. We sailed from England in December, 1787, and arrived at Otaheite the 26th of October, 1788. On the 4th of April, 1789, we left Otaheite, with every favourable appearance of completing the object of the voyage, in a manner equal to my most sanguine expectations. At this period the ensuing Narrative commences.

Track of the Bounty's Launch from Tofoa to Timor by Lieut. William Bligh, 1789

I sailed from Otaheite on the 4th of April 1789, having on board 1015 fine bread-fruit plants, besides many other valuable fruits of that country, which, with unremitting attention, we had been collecting for three and twenty weeks, and which were now in the highest state of perfection.

On the 11th of April, I discovered an island in latitude 18° 52´ S. and longitude 200° 19´ E. by the natives called Whytootackee. On the 24th we anchored at Annamooka, one of the Friendly Islands; from which, after completing our wood and water, I sailed on the 27th, having every reason to expect, from the fine condition of the plants, that they would continue healthy.

On the evening of the 28th, owing to light winds, we were not clear of the islands, and at night I directed my course towards Tofoa. The master had the first watch; the gunner the middle watch; and Mr. Christian, one of the mates, the morning watch. This was the turn of duty for the night.

Just before sun-rising, Mr. Christian, with the master at arms, gunner's mate, and Thomas Burket, seaman, came into my cabin while I was asleep, and seizing me, tied my hands with a cord behind my back, and threatened me with instant death, if I spoke or made the least noise: I, however, called so loud as to alarm every one; but they had already secured the officers who were not of their party, by placing centinels at their doors. There were three men at my cabin door, besides the four within; Christian had only a cutlass in his hand, the others had muskets and bayonets. I was hauled out of bed, and forced on deck in my shirt, suffering great pain from the tightness with which they had tied my hands....