A Narrative of some of the Lord's Dealings with George Muller Written by Himself, Third Part 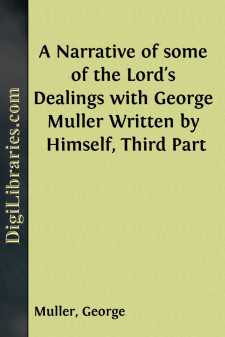 IN the deep consciousness of my entire natural inability for going through the work, which is before me, to the profit of the reader and to the glory of God, I am nevertheless of good cheer in beginning this service; for the Lord has enabled me often to bow my knees before Him, to seek His help respecting it; and I am now expecting His help. He delights in making His strength perfect in our weakness, and therefore will I also, though so weak, look for His strength. And if through this my feeble effort, to show forth the praises of the Lord, good be done (of which I have the fullest assurance, on account of the abundance of supplication which for many months past has been found in my spirit in reference to this service,) I do desire from my inmost soul to ascribe all the honour and glory to the Lord.

I purpose in writing this third part of my Narrative to adopt the same mode which I employed in the two former parts, namely that of giving extracts from my journal, and accompanying them with such remarks as it may be desirable to make for the profit of the reader. The second part carries on the Narrative up to the end of the year 1840, so far as it regards my own personal affairs; but only to Dec. 9, 1840, so far as it regards the Orphan-Houses, and other objects of the Scriptural Knowledge Institution, as on that day the accounts were closed. From this period, then, the Narrative is continued.

Dec. 10, 1840. When the accounts were closed last evening, the balance in hand was 15l. 0s. 6 1/4d., but as nearly 15l. of this sum had been put by for the rent of the Orphan-Houses, the sum really in hand for use was only 4s. 6 1/4d. With this little sum we commenced the sixth year of this part of the work, while there are daily, as usual, more than a hundred persons to be provided for.

—A little boy brought half-a-crown to the Boys-Orphan-House, this morning, which is the first gift in this sixth year. Thus we had altogether 7s. 0 1/4d. for this day, which was enough to pay for the milk in the three houses, and to buy some bread in one of them. We have never before been so poor at the commencement of the year.

Dec. 11. Only 2s. 6d. more had come in since last evening. There was sufficient for dinner in the Girls and Infant-Orphan-Houses, but scarcely enough in the Boys-Orphan-House. This half-crown, therefore, supplied the remainder of the dinner in the Boys-Orphan-House. But now there was no money to take in milk, in any of the houses, for tea, or to buy any bread. However the Lord helped us through this day also. About one oclock some trinkets, which had been sent a few days since, were disposed of for 12s., by which the usual quantity of milk, and a little bread could be taken in. [I observe here that there is generally bread for two or three days in the houses, the children eating the bread on the third day after it is baked. When, therefore, we are unable to take in the usual quantity, for want of means, we procure stale bread afterwards.]