A Narrative of some of the Lord's Dealings with George Muller Written by Himself. Second Part 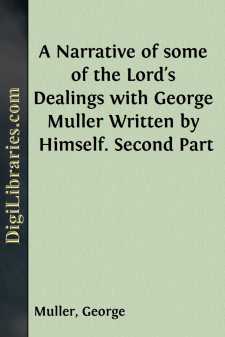 THROUGH grace I am, in some measure, conscious of my many weaknesses and deficiencies; but, with all this, I know that I am a member of the body of Christ, and that, as such, I have a place of service in the body. The realization of this has laid upon me the responsibility of serving the church in the particular way for which the Lord has fitted me, and this has led me to write this second little volume, if by any means those of my fellow-saints, who have not yet learned the importance and preciousness of dealing with God Himself under all circumstances, may be helped in learning this lesson. Nor did I think that the first part of this Narrative rendered the second part needless, because that contains more especially the Lord's dealings with me as an individual, whilst this gives, more particularly, an account of the remarkable way in which the Lord has helped me in reference to His work in my hands. For this second part carries on the account of the Orphan-Houses, etc., which are under my care, and contains the substance of the Reports previously published, so that any one who wishes to have the account from the beginning up to the end of last year, may be able to obtain it. This latter point alone made it needful for me to think about publishing this second part, as of the Reports for 1838 and 1839, which still almost daily are inquired after, there are only a few copies left, though 2,500 of the one and 3,000 of the other were published and of the Report for 1840 there are also only about 500, out of 4,000, remaining. The being thus able to put the whole account of the work into the hands of an inquiring individual, affords such a one a fairer opportunity of seeing the working of those scriptural principles on which the Institution is established. And, lastly, the Lord's continued blessing upon the first part of the Narrative and the Reports, both to believers and unbelievers, has induced me to publish this second volume, which I now affectionately commend to the prayers of the saints, requesting at the same time their prayers for myself.

In publishing the continuation of the Narrative of some of the Lord's dealings with me, I have thought it well to give it in the same form in which the larger portion of the former part is written. I therefore proceed to give extracts from my journal making here and there such remarks as occasion may seem to require. The first, part of the Narrative was carried on to the beginning of July 1837, from which period the Continuation commences.

July 18, 1837. Four trials came upon me this morning, without my having previously had opportunity for secret prayer. I had been prevented from rising early, on account of having to spend part of the night in a sick chamber; but this circumstance shows, how important it is to rise early, when we are able, in order that we may be prepared, by communion with the Lord, to meet the trials of the day.

Aug. 15. Today the first 500 copies of my Narrative arrived, and I had, once more, some conflict of mind whether, after all, I had not been mistaken in this matter. A sort of trembling came over me, and a wish to be able to retrace the step. Judging, however, from the most searching self-examination, through which I had caused my heart to pass again and again, as to my motives, before I began writing, and whilst I was writing; and judging, moreover, from the earnestness in prayer with which I had sought to ascertain the mind of God in the matter, and from the subsequent full assurance which I had had of its being according to His will, that in this way I should serve the Church;—I was almost immediately led to consider this uncomfortable and trying feeling as a temptation, and I therefore went to the box, opened it, brought out some copies, and soon after gave away one, so that the step could not be retraced. [This was the last temptation or struggle I have had of that kind; for, though, very many times since, I have had abundant reason for praising the Lord that He put such an honour upon me, in allowing me to speak well of His name in so public a manner, I have never since, even for one minute, been allowed to regret publishing the Narrative; and almost daily have I been more and more confirmed in the conviction, that the giving such like publications to the church, making known the Lord's dealings with me, is one part of my service towards the saints.]

Aug. 17. Today two more children were received into the Infant Orphan-House, which makes up our full number, 66 in the Girls' and infant-Orphan-Houses.

Aug. 28. When brother Craik and I began to labour in Bristol, and consequently some believers united with us in fellowship, assembling together at Bethesda, we began meeting together on the basis of the written Word only, without having any church rules whatever. From the commencement it was understood, that, as the Lord should help us, we would try everything by the word of God, and introduce and hold fast that only which could be proved by Scripture. When we came to this determination on Aug....