A Narrative of Some of the Lord's Dealings with George Muller Written by Himself, Fourth Part 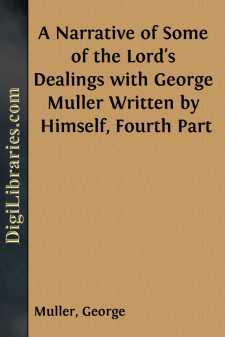 PREFACE TO THE FIRST EDITION OF THE FOURTH PART

Twelve years have elapsed since the period at which the third part of the Narrative of the Lord's dealings with me closes. It has not been for want of matter, that this fourth part has not appeared sooner; but the increased and ever increasing variety of other occupations has kept me hitherto from arranging the materials for the press. Of late, however, I have judged, for the following reasons, that I ought particularly to give myself to this service.

1, It has pleased the Lord so abundantly to bless the former parts of my Narrative to the comfort, encouragement, strengthening, and instruction of those who are young and weak in the faith, and to those unacquainted with the simplicity of the truth, that I consider myself to be the servant of such; and I feel that responsibility is laid upon me, to do what further I can, in this way, to serve them. And this, I confess, I do joyfully; for my spirit has oft times been not a little refreshed during the eighteen years which have elapsed, since I published the first part of my Narrative, by the many hundreds of letters I have received, giving an account of the blessing, which the writers of them have derived from the perusal of it; and I have thus been again and again encouraged to go on with the work.

2, I think it important, that the reader of the first three parts of my Narrative should have a right impression of the work in which I am engaged. He may not be acquainted with the Reports of the Scriptural Knowledge Institution for Home and Abroad, which have been published since 1844, and therefore he may know no more of the work in which I am especially engaged, than the first three parts of my Narrative give him. In that case he would not know how the work has been growing since that period; he would not be aware, that it is now three or four times as large as it was in 1844, and is still more and more increasing. He would not know in that case, that the principles of Holy Scripture on which the work of God in my hands was carried on, when comparatively small, and which then were found to be sufficient, even in these last days, are the same on which it is carried on now, though the work is now so large. This point has especially weighed with me, in desiring the publication of the continuation of the account of the Lord's dealings with me in the form of the first three parts, in order that the Living God may be glorified through this account. I judged, moreover, that, whilst the first three parts may especially furnish, to the believer in the Lord Jesus for his private life subjects for comforting and encouraging reflections; this part, besides doing the same still further, may especially be of help to the servant of Christ labouring for God on a large scale, or to the man of God who seeks to carry on business on a large scale, on Scriptural principles.

3, Though the Reports of the Scriptural Knowledge Institution for Home and Abroad have been issued generally every year or every two years; yet, as they are not bound together, they may be lost in part, and thus the chain be interrupted....