by Enos B. (Enos Benjamin) Comstock 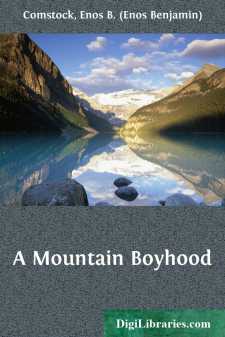 Father and mother settled on the Kansas prairie in the early fifties. At that time Kansas was the frontier. Near neighbors were twenty miles or more apart. There was no railroad; no stages supplied the vast unsettled region. A few supplies were freighted by wagon. However, little was needed from civilized sources, for the frontier teemed with game. Myriads of prairie chickens were almost as tame as domestic fowls. Deer stared in wide-eyed amazement at the early settlers. Bands of buffalo snorted in surprise as the first dark lines of sod were broken up. Droves of wild turkey skirted the fringes of timber. Indians roamed freely; halting in wonder at the first log cabins of the pioneers.

In my father's old diary I found the following:

Drove through from Iowa to Kansas by ox team. Located four days' drive south of Portsmouth.* Not much timber here.

Just returned from visit to our nearest neighbor, John Seeright, a day's drive away. Took the chickens and cow along and stayed several days.

Father told me that the early settlers did not like a region after it got "settled up." He laughed heartily when he said this. It is quite true nevertheless; as soon as a region became "settled up," the pioneers were ready to push on again into the unknown. They loved the frontier—it held adventure, hazard always, mystery, ofttimes, romance, life. They moved ahead of and beyond civilization—even the long arm of the law did not penetrate their wilderness fastnesses. Their experience—so numerous books cannot hold them all—have become history.

It is not strange that my parents welcomed the gold rush of '59. It called them once more into the farther wilderness, the vaster unknown. When news of the finding of gold in the Rockies came across the plains, legions of adventurers trailed westward. The few roads that led across the rolling prairies to the Rockies were soon deep-cut. Wagons trains strung out across the treeless land like huge, creeping serpents moving lazily in the sun. Joyfully the adventurers went—happy, courageous. They were the vanguards of civilization, pushing ever to the West.

To my lifelong regret, my boyhood came after the gold rushes were over; the buffalo bands had passed for the last time; the Indian fighting ended. However, these exciting events were still fresh in the memory of my parents. When neighbors came to visit us, long hours were spent in talking over and comparing experiences. I thrilled as my father told of climbing Long's Peak, the eastern sentinel of the Rockies—of Estes Park, teeming with trout and game. I thought then that I had been born too late—that all the big things in the world were past history. I feared then that even the Rockies would lose their wildness before I could explore them.

Within sight and sound of the farm where I was born, a number of Civil War skirmishes took place. The eastern Kansas border during the trying time of the early sixties was perhaps the worst place in all the world to live....